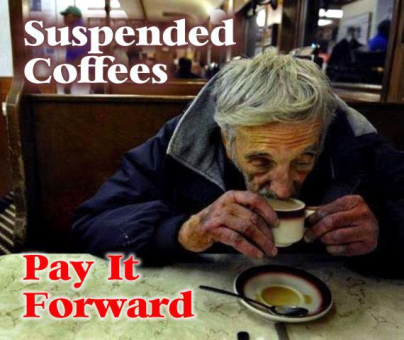 A caffè sospeso ( suspended coffee) is a cup of coffee paid for in advance as an anonymous act of charity. The tradition began in the working-class cafes of Naples, where someone who had experienced good luck would order a sospeso, paying the price of two coffees but receiving and consuming only one. A poor person enquiring later whether there was a sospeso available would then be served a coffee for free. Coffee shops in other countries have adopted the sospeso to increase sales.

One 2010 account claims the tradition was over 100 years old, but declined during the postwar period, so that it is mainly observed around Christmastime. A 2008 article reported the tradition was obsolescent, the reporter visiting three bars where it had not been observed for at least 15 years.

The sospeso gave the title to a 2008 journalism collection by Neapolitan Luciano De Crescenzo, Il caffe sospeso: Saggezza quotidiana in piccoli sorsi, which helped publicise the tradition throughout Italy. The idea has been reported in cafés in Bulgaria Kiev, Melbourne,  Quebec,  Russia, Spain and Argentina A Dutch campaign at Christmas 2011 gave a discount on the price of the donated coffee.

The UK arm of coffee chain Starbucks signed up for a charity initiative based on the suspended coffee concept in April 2013, in which it said it would match the value of each suspended coffee with a cash donation to the Oasis charity.  The growth of the trend in other coffee shops in the UK also received media coverage around the same time.