History of the Rainbow Flag

The History of the Rainbow Pride Flag

Use of the rainbow flag by the gay community began in 1978 when it first appeared in the San Francisco Gay and Lesbian Freedom Day Parade. Borrowing symbolism from the hippie movement and black civil rights groups, San Francisco artist Gilbert Baker designed the rainbow flag in response to a need for a symbol that could be used year after year.

Baker designed a flag with eight stripes. According to Baker, those colors represented, respectively: sexuality, life, healing, sun, nature, art, harmony, and spirit. Baker dyed and sewed the material for the first flag himself.

Baker soon approached San Francisco’s Paramount Flag Company about mass producing and selling his “gay flag”. Unfortunately, Baker had hand dyed all the colors, and since the color “hot pink” was not commercially available, mass production of his eight striped version became impossible. The flag was thus reduced to seven stripes. 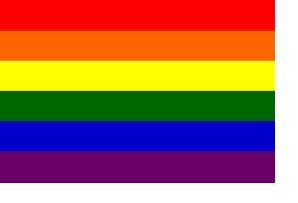 In November 1978, San Francisco’s gay community was stunned when the city’s first openly gay supervisor, Harvey Milk, was assassinated. Wishing to demonstrate the gay community’s strength and solidarity in the aftermath of this tragedy, the 1979 Pride Parade Committee decided to use Baker’s flag. The committee eliminated the indigo stripe so they could divide the colors evenly along the parade route, three colors on one side of the street, and three on the other. Soon the six colors were incorporated into a six striped version that became popularized.

Colour has long played an important role in our community’s expression of pride. In Victorian England, for example, the colour green was associated with homosexuality. The color purple (or, more accurately, lavender) became popularized as a symbol for pride in the late 1960s a frequent post Stonewall catchword for the gay community was “Purple Power.” And, of course, there’s the pink triangle. Although it was first used in Nazi Germany to identify gay males in concentration camps, the pink triangle only received widespread use as a gay pop icon in the early 1980s. But the most colorful of our symbols is the Rainbow Flag, and its rainbow of colors red, orange, yellow, green, blue, and purple represents the diversity of our community.