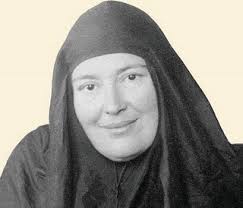 Mother Maria’s life makes her someone for me to look to for guidance as to how to redeem the irredeemable. “Mother Maria of Paris is a saint of our day and for our day; a woman of flesh and blood possessed by the love of God.” So wrote British intellectual and Orthodox bishop Harold Bloom. Born to a prominent Russian Orthodox family, Mother Maria (then known as Elizaveta Pilenko), renounced her religious beliefs at age fourteen when her father died. She later became a committed atheist and Bolshevik. In 1910 she married and was actively involved in literary and revolutionary circles. By 1913 her marriage ended in a divorce. When the anti-communist White Army took control of the town she was in they put her on trial as a communist. The judge was a former teacher of hers and Mother Maria was acquitted. The two fell in love and were married. Mother Maria and her husband fled Soviet Russia and arrived in Paris in 1923. By then Mother Maria was involved in both theological studies and carrying on social work amongst impoverished Russian exiles. Her second marriage also dissolved.

Mother Maria began her journey back to Christianity because, as she would later explain, “Christ also died. He sweated blood. They struck his face.” After getting to Paris, her Orthodox bishop – aware of her work on behalf of the poor and her failed marriages — encouraged her to take vows as a nun, something she did only with the bishop’s promise that she would not have to live in a monastery. In 1932, Mother Maria took the monastic Christian name Maria and made her rented house in Paris into a place that became a hybrid of commune/homeless shelter/intellectual/theological salon and a food pantry rolled into one. As Jerry Ryan wrote (in a review of Mother Maria Skobtsova: Essential Writings), “Many were scandalized by Mother Maria. This woman had been twice divorced, had an illegitimate child by another man, had leftist political sympathies and was an eccentric. At her becoming a nun she took the name of Maria in memory of St. Mary of Egypt, a prostitute who became an extreme crazed ascetic.” Mother Maria continued to scandalize. Her habit was filthy with grease from the kitchen and paint from her workshop. She would hang out at bars and had no patience with long Orthodox liturgies, and found strict ascetic fasts impossible to keep.

As Olivier Clement writes in the preface to Mother Maria Skobtsova: Essential Writings, “If we love and venerate Mother Maria it is not in spite of her disorder, her strange views and her passion. It is precisely these qualities that make her so extraordinarily alive among so many bland and pious saints. Unattractive and dirty, strong, thick and sturdy, yes, she was truly alive in her suffering, her compassion, her passion.” Mother Maria wrote, “In our time Christ and the life-giving Holy Spirit demand the whole person. The only difference from state mobilization is that the state enforces mobilization [to care for people], while our faith waits for volunteers. And, in my view, the destiny of mankind depends on whether these volunteers exist and, if they do, how great their energy is, how ready they are for sacrifice.”

Mother Maria dismissed people like me who are preoccupied with our spiritual life and so-called personal relationship with God. She said that my sort of spiritual narcissism must be abandoned if one truly loves. Christian egocentrism is a contradiction in terms, she said. In her essay called “Types of Religious Life” Mother Maria denounced the church’s institutional structures, rituals, even esthetic beauties, as dead ends. Mother Maria also dismissed “trends of social Christianity … based on a certain rationalistic humanism [that] apply only the principles of Christian morality to ‘this world’ and do not seek a spiritual and mystical basis for their constructions.”

After the fall of France to the Germans, when the order from the Germans and the collaborationist Vichy French government requiring Jews to wear the yellow star was published, Mother Maria wrote this poem entitled “Israel.”

Two triangles, a star, The shield of King David, our forefather. This is election, not offense. The great path and not an evil. Once more in a term fulfilled, Once more roars the trumpet of the end; And the fate of a great people Once more is by the prophet proclaimed. Thou art persecuted again, O Israel, But what can human malice mean to thee, who have heard the thunder from Sinai?

Jews began coming to Mother Maria begging for Christian baptismal certificates in order to escape deportation. To help them was to risk death. Risk notwithstanding, Mother Maria took in Jews and gave them forged documents declaring that they were non-Jews. Soon her house was literally bursting at the seams. Mother Maria once remarked, “It is amazing that the Germans haven’t pounced on us yet.” She also said that if anyone came looking for Jews she would show them an icon of the Mother of God.

The children’s book, Silent as a Stone, St. Maria of Paris and the Trash Can Rescue, tells the story of Mother Maria’s rescue of Jewish children. Her home was near the cycling stadium of Vélodrome d’Hiver where the Jews were held on their way to deportation. The book is based on firsthand accounts of what Mother Maria was able to accomplish during her visits to that stadium in the terrifying days of June 1942. As those who had been rounded up awaited transport to the camps, Mother Maria used her status as a nun to bring food to those waiting for transport and then smuggled some of their children out of the stadium in trashcans. This was taking place while Mother Maria continued to help the Jews who managed to come to her house to escape.

On February 8, 1943 the Germans “pounced” at last. They arrested Mother Maria, her son Yuri, her priest Father Dmitri, and their helper, Elia Fondaminski. Father Dmitri was interrogated by Hans Hoffman, a Gestapo officer. A portion of the interrogation has been preserved, as transcribed by the ever meticulous Nazis.

Hoffman: “If we release you, will you give your word never again to aid Jews?”

Father Dimitri: “I can do no such thing. I am a Christian and must act as I must.” (Hoffman struck the priest across the face.)

Hoffman: “Jew lover! How dare you talk of helping those swine as being a Christian duty?”

Father Dimitri: (holding up the crucifix from his cassock): “Do you know this Jew?”

Mother Maria was sent to the Ravensbrück concentration camp. Prisoners who survived have shared some of their memories of their time with her: “She exercised an enormous influence on us all,” wrote one survivor after the war, “No matter what our nationality, age, political convictions — this had no significance whatever. Mother Maria was adored by all. The younger prisoners gained particularly from her concern. She took us under her wing. We were cut off from our families, and somehow she provided us with a family.”