The Feast of St Francis – 4 October

The Prayer of Saint Francis is a Catholic Christian prayer. It is widely but erroneously attributed to the 13th-century saint Francis of Assisi. The prayer in its present form cannot be traced back further than 1912, when it was printed in Paris in French, in a small spiritual magazine called La Clochette (The Little Bell), published by La Ligue de la Sainte-Messe (The Holy Mass League). The author’s name was not given, although it may have been the founder of La Ligue, Fr. Esther Bouquerel.
A professor at the University of Orleans in France, Dr. Christian Renoux, published a study of the prayer and its history in French in 2001.
The prayer has been known in the United States since 1927 when its first known translation in English appeared in January of that year in the Quaker magazine Friends’ Intelligencer (Philadelphia), where it was attributed to St. Francis of Assisi. Cardinal Francis Spellman and Senator Albert W. Hawkes distributed millions of copies of the prayer during and just after World War II.[1]:92–95 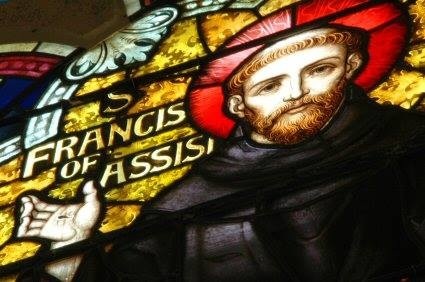 A popular hymn version, adapted and set to music by Sebastian Temple, ©1967 by OCP Publications, is Make Me A Channel of Your Peace. It is an anthem of the Royal British Legion and is usually sung every year at the Service of Remembrance in November at the Royal Albert Hall, London.
History[edit]

Summarizing the Christian Renoux book on the prayer, an article by Egidio Picucci on the 19–20 January 2009 issue of L’Osservatore Romano says that the earliest record of the prayer is its appearance, as “a beautiful prayer to say during Mass” in the December 1912 number of the small devotional French publication La Clochette, “the bulletin of the League of the Holy Mass”. In 1915, Marquis Stanislas de La Rochethulon, president of the Anglo-French association Souvenir Normand, which called itself “a work of peace and justice inspired by the testament of William the Conqueror, who is considered to be the ancestor of all the royal families of Europe”, sent this prayer to Pope Benedict XV.
The Pope had an Italian translation published on the front page of L’Osservatore Romano of 20 January 1916. It appeared under the heading, “The prayer of Souvenir Normand for peace”, and with the explanation: “Souvenir Normand has sent the Holy Father the text of some prayers for peace. We have pleasure in presenting in particular the prayer addressed to the Sacred Heart, inspired by the testament of William the Conqueror”. On 28 January 1916, the French newspaper La Croix reprinted, in French, the Osservatore Romano article, with exactly the same heading and explanation. La Rochethulon wrote to the newspaper to clarify that it was not a prayer of Souvenir Normand, but he chose not to mention La Clochette, the first publication in which it had appeared. Because of its appearance on L’Osservatore Romano and La Croix as a prayer for peace during the First World War, this prayer then became widely known.[3]
Quotations[edit]

Mother Teresa of Kolkata made it part of the morning prayers of the Roman Catholic religious institute she established, the Missionaries of Charity. She attributed importance to it when receiving the Nobel Peace Prize in Oslo in 1979 and asked that it be recited.
Margaret Thatcher, after winning the 1979 United Kingdom general election, paraphrased the prayer on the doorstep of 10 Downing Street, surrounded by a throng of reporters, having “kissed hands” with Queen Elizabeth II and become Prime Minister.
Archbishop Desmond Tutu, winner of the 1984 Nobel Peace Prize, declared that it was “an integral part” of his devotions.
In October 1995, President Bill Clinton quoted it in his welcoming speech to Pope John Paul II on his arrival in New York to address the United Nations.
Nancy Pelosi used it when she became Speaker of the U.S. House of Representatives in 2007.[4]
Musical adaptations of the prayer include those by John Foley, John Michael Talbot, Sarah McLachlan, Moya Brennan, Sarah Hart, Sebastian Temple, Denison Witmer, the Ragamuffin Band, the Burns Sisters, Singh Kaur, Joey Rumor, and Ryan Cayabyab and also alyssa ashley digamo live in maynila .
The prayer is quoted in the movie Rambo by a priest as he blesses Sylvester Stallone before he sets off into Burma to rescue humanitarian workers.
The prayer is quoted in an episode of the television series Justified (TV series) by the character Boyd Crowder, who preaches it to character Marshall Raylan Givens after having a revelation.
The medic Eugene Roe recites part of the prayer in the episode “Bastogne” of Band of Brothers.
The prayer was used in a slightly abbreviated form in the 1972 film, Brother Sun, Sister Moon.
The prayer is also included in the song “The Shattered Fortress” by Dream Theater.
The prayer is used by Grandmaster Choa Kok Sui in his Twin Hearts Meditation.
The prayer is part of the mural above the interior entrance to the St. Anthony Dining Room on Leavenworth Street in the Tenderloin District of San Francisco, California.
The prayer was read by the character of Sonny Corinthos at the funeral of Stone Cates in 1995 on General Hospital.
The hymn form of the prayer was also a part of the funeral for Diana, Princess of Wales on 6 September 1997. Sinéad O’Connor included her version of the song on the Princess Diana tribute album.
The prayer is sung by Snatam Kaur in her song Servant of Peace, which is on her album Liberation’s Door.
The prayer is recited by Shepherd Book in the Firefly TV Series based comic The Shepherd’s Tale
The prayer was sung during the religious wedding ceremony of Prince Albert II of Monaco to South African Charlene Wittstock on 2 July 2011.
Radhanath Swami cites this in the book “The Journey Home” as an impetus in his epic journey to understand spiritual truths.[5]
The character of George mentions it and quotes wrongly from it (“It’s better to love than to be loved…”, etc.) in Episode 7 of Season 3 of the television show Bored To Death.
The last episode of season 6 of Buffy the Vampire Slayer, “Grave”, uses the Sarah McLachlan song version for a montage.
Reverend Smith, from the HBO series Deadwood, recites lines from the prayer in Season 1, Episode 11 “Jewel’s Boot Is Made for Walking”.
The prayer can be heard on the Canadian Tenors CD, “The Perfect Gift”. (2009). It is called “Instrument of Peace”.
Historical studies[edit]

Renoux on the prayer at http://www.franciscan-archive.org
Another popular version of ‘St. Francis Peace Prayer’ & the version as featured in the DVD / TV Show ‘Madre Teresa’
A Biography of St Francis of Assisi
Michael John Trotta’s Setting for choir