“but the Bible says so!”

homosexuality is an abomination, according to Leviticus 18:22, and cannot be condoned under any circumstances. The following response is an argument  written to someone who allegedly quoted this:

Thank you for doing so much to educate people regarding God’s Law…. End of debate.

I do need some advice from you, however, regarding some other elements of God’s Laws and how to follow them.

1. Leviticus 25:44 states that I may possess slaves, both male and female, provided they are purchased from neighboring nations. A friend of mine claims that this applies to Mexicans, but not Canadians. Can you clarify? Why can’t I own Canadians?

2. I would like to sell my daughter into slavery, as sanctioned in Exodus 21:7. In this day and age, what do you think would be a fair price for her?

3. I know that I am allowed no contact with a woman while she is in her period of menstrual uncleanliness – Lev.15: 19-24. The problem is how do I tell? I have tried asking, but most women take offense.

4. When I burn a bull on the altar as a sacrifice, I know it creates a pleasing odor for the Lord – Lev.1:9. The problem is, my neighbors. They claim the odor is not pleasing to them. Should I smite them?

5. I have a neighbor who insists on working on the Sabbath.Exodus 35:2. clearly states he should be put to death. Am I morally obligated to kill him myself, or should I ask the police to do it?

6. A friend of mine feels that even though eating shellfish is an abomination – Lev. 11:10, it is a lesser abomination than homosexuality. I don’t agree. Can you settle this? Are there ‘degrees’ of abomination?

7. Lev. 21:20 states that I may not approach the altar of God if I have a defect in my sight. I have to admit that I wear reading glasses. Does my vision have to be 20/20, or is there some wiggle- room here?

8. Most of my male friends get their hair trimmed, including the hair around their temples, even though this is expressly forbidden by Lev. 19:27. How should they die?

9. I know from Lev. 11:6-8 that touching the skin of a dead pig makes me unclean, but may I still play football if I wear gloves?

10. My uncle has a farm. He violates Lev.19:19 by planting two different crops in the same field, as does his wife by wearing garments made of two different kinds of thread (cotton/polyester blend). He also tends to curse and blaspheme a lot. Is it really necessary that we go to all the trouble of getting the whole town together to stone them? Lev.24:10-16.

Couldn’t we just burn them to death at a private family affair, like we do with people who sleep with their in-laws? (Lev. 20:14)

I know you have studied these things extensively and thus enjoy considerable expertise in such matters, so I am confident you can help. Thank you again for reminding us that God’s word is eternal and unchanging.

1 Love the sinner, hate the sin. This is a backhanded way to tell someone you love them, at best. It also ignores the command by Jesus not to focus on the splinter in our neighbors’ eyes while a plank remains in our own. Bottom line: we all screw up, and naming others’ sin as noteworthy while remaining silent about your own is arrogant.

2 The Bible clearly says…Two points on this one. First, unless you’re a Biblical scholar who knows the historical and cultural contexts of the scriptures and can read them in their original languages, the Bible isn’t “clear” about much. Yes, we can pick and choose verses that say one thing or another, but by whom was it originally said, and to whom? Cherry-picking scripture to make a point is called proof-texting, and it’s a theological no-no. Second, the Bible can be used to make nearly any point we care to (anyone want to justify slavery?), so let’s not use it as a billy club against each other.

3 God needed another angel in heaven, so He called him/her home. Another well-meaning but insensitive thing to say. This assumes a lot about what the person you’re speaking to believes, and it also ignores the grief they’re going through. The person who died is, well, dead. Focus on the needs of the living right in front of you.

4 Are you saved? I’ve addressed the theological understandings of hell and judgment in other pieces, but regardless of whether you believe in hell, this is a very unattractive thing to say. First, it implies a power/privilege imbalance (ie, “I’m saved, but I’m guessing you’re not based on some assumptions I’m making about you), and it also leaps over the hurdle of personal investment and relationship, straight into the deep waters of personal faith. If you take the time to learn someone’s story, you’ll like learn plenty about what they think and believe in the process. And who knows? You might actually learn something too, rather than just telling others what they should believe.

who are tortured to death? What about the millions of Jews murdered in the Holocaust? And this also implies that, if really horrible things are happening to you, God “gave” it to you. Is this a test? Am I being punished? Is God just arbitrarily cruel? Just don’t say it.

6 America was founded as a Christian nation. Honestly, I find it hard to believe we are still having this conversation, but here we are. Anyone with a cursory understanding of history understands that we were founded on the principle of religious liberty – not just the liberty to be a Christian – and that many of the founding fathers explicitly were not Christian. Thomas Jefferson, anyone?

7 The Bible says it; I believe it; that settles it. If ever there was a top-shelf conversation killer this is it. You’re not inviting any opinion, response, thought or the like. You’re simply making a claim and telling others to shut up. Also, I’ve yet to meet someone who takes EVERY WORD of the Bible literally. Everyone qualifies something in it, like the parts about keeping kosher, wearing blended fibers, stoning adulterers, tossing your virgin daughters into the hands of an angry mob…you get the point.

8 It was Adam and Eve, not Adam and Steve. This is a little “joke” some Christians use to assert the superiority of opposite-sex unions over same-sex ones. But here’s the thing: if you really believe the first and only two people on the planet at one point were Adam and Eve, who did their kids marry

and have babies with? This, my friends, is incest (happened again if you believe Noah’s family members were the only survivors of the great flood). This just demonstrates the selective moral blindness many of us Christian have and seriously compromises our credibility about anything else.

9 Jesus was a Democrat/Republican.Seems to me that, when pressed, Jesus was happy to keep church and state separate. Remember the whole thing about giving to Caesar what is Caesar’s, and giving to God what is God’s? And if we choose to, we can pick and choose anecdotes to support Jesus being a liberal (care for the poor, anti death penalty) or a conservative (challenge government authority, practice sexual purity). Jesus was Jesus, and if it was as simple as pegging him to one of two seriously flawed contemporary forms of government, I can promise you I would not be a Christian.

10 (Insert sin here) is an abomination in the eyes of God. Almost always, when this phrase is invoked, it has something to do with sex or sexuality. Seldom do folks care to mention that divorce and remarriage is in that list of so-called abominations. Also, there are several words translated in English Bibles as ‘abomination,’ many of which don’t imply the sort of exceptionalism that such a word makes us think of today. And while we’re on the thread of things scripture says God “hates,’ let’s consider this from Proverbs:

These six things doth the LORD hate: yea, seven are an abomination unto him: A proud look, a lying tongue, and hands that shed innocent blood, An heart that deviseth wicked imaginations, feet that be swift in running to mischief, A false witness that speaketh lies, and he that soweth discord among  brethren.

I’m going to go out on a limb and propose that telling someone that who they are or what they are doing is an abomination to God is tantamount to sowing discord among your brothers and sisters. And this, according to the text above is itself an abomination. 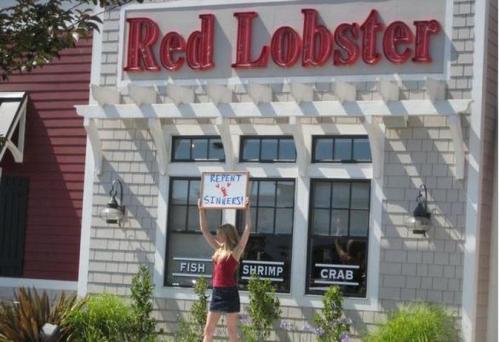 “But all in the seas or in the rivers that do not have fins and scales, all that move in the water or any living thing which is in the water, they are an abomination to you.” (Leviticus 11:10)

so why did he make them?