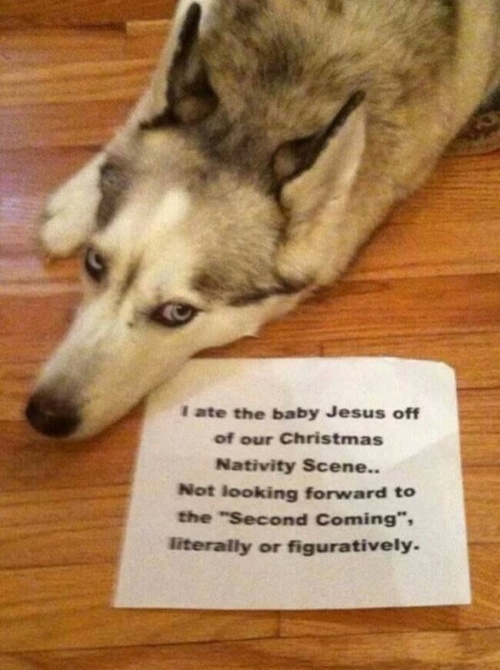 Baby Jesus – no crib for his bed

But as Americans (especially here in New York where I live) we enjoy the illusion that we are a humanistic, pluralistic society: a rainbow-hued 21st century melting pot. Sometimes we bump up hard against that illusion.

This happened to me the other morning when I arrived at work in my New York City government office.

I had been enjoying the festive decorations adorning our drab offices for the last couple of weeks — every day people added to the glitter and cheer with tinsel, candy canes, Santas and so on. As I do every year, I put out decorations of my own: Rudolph, a small plaster gingerbread house, an old cardboard pop-up of Santa’s sled near a snow-covered farmhouse.

But when I arrived at work the other day I saw something new on the front desk of our reception area, something that had never been displayed before: a crèche — a small crèche, but still, a crèche.

As politely as I could, I told the receptionists who had placed it there that crèches are not allowed as public displays on New York City government property. These two, kindly women were incredulous, and quickly pointed to the menorah as though it was a magical antidote to the crèche. Yes, good — I see that you have a menorah. But still, crèches are not allowed. They asked why, and as I tried to explain I found I could not. Instead of offering any reasonable explanation as to why the crèche was different than the menorah, I found that I was voiceless, speechless. I certainly didn’t mean to insult their tradition but I was very uncomfortable at the sight of the crèche, however small and unassuming. I stuttered and sputtered: “Because it is not allowed, that’s why. It’s the law.”

I went to my desk and Googled “nativity scene New York City.” Was I right? I quickly found a 2006 court decision called Skorus vs. the City of New York that banned nativity scenes — but did it apply only to New York City public schools? There was also a 1989 SCOTUS case, County of Allegheny vs. the ACLU, which banned crèches on government property — but not menorahs. I complained to my boss who then spoke to her boss who spoke to the EEO officer who spoke to the legal department. By the end of the day, word had gotten around. I had been yelled at and spurned by colleagues. I had received an outraged email to the effect of “How can you of all people, who is so liberal and open-minded, be so intolerant and wrong on this issue?” Meaning, “How could you — who is so Jewish yet we manage to tolerate you — object to our customs?” A Jewish colleague took me aside to say that she didn’t mind the little crèche at all. And (she added gratuitously) I like Christmas music!” Her clear message: She would not be a foot soldier in my misguided war on Christmas.

The crèche was still there later when I requested a meeting with the EEO officer who asked me, pen in hand: “What is your objection?” Again, I sputtered: “It’s the law, isn’t it?” “So you are objecting because you think it is against the law?” Again, I failed. I was wordless, voiceless. Instead I asked her, “Why does it fall to the minority to have to explain?”

The next day, I spoke to my wise and perceptive daughter, who said it’s because the symbol is too close to us as Jews. If it was Ganesha or some other distant symbol we wouldn’t care, however deeply religious and holy the symbol. But for Jews, the crèche cuts close and deep: The nativity scene is not the beginning, it’s the beginning of the end. Those are Jews in that manger, and they are giving birth to a hatred of Jews that has burned and swelled and murdered us for over two thousand years.

Maybe she didn’t say all that, but that is what she meant. And that is what I meant but could not possibly say at work to my Christian colleagues who snarled at me for quoting law as the reason I wanted the crèche removed. While you are rejoicing at the birth of baby Jesus I am searching for a safe place to hide with my family. Was my discomfort atavistic, genetically programmed into me by centuries of persecution?

If only I could tell them: A crèche is different because the United States is different because, here, there is separation of Church and state. And I cherish that, don’t you? It is my safety; it is what makes America different than Europe. And we work for the government: hence, no baby Jesus. I can admire your trees and your lights in this dark season and your Santa with his merry laugh. I can smile at your elves and shake my head at the seasonal madness at the malls.

But it all gets too serious when I see that manger with its empty cradle waiting for the birth of a baby who will be proclaimed the Son of God and whose horrible death will be blamed on me. And my tax dollars pay for that reception area and it’s a public space where Christians and Jews and Hindus and Muslims and Sikhs and Buddhists and atheists and every one else are welcome. And baby Jesus is not.

Comments Off on Baby Jesus – no crib for his bed

Loving Life and Inspiring Others