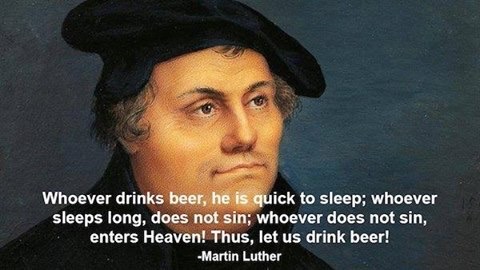 Two nuns were shopping at a Mini-Mart. As they passed by the chilled drink cabinet, one nun said to the other, “Wouldn’t a nice cool beer or two taste wonderful on a hot summer evening?”
The second nun answered, “Indeed it would, sister, but I would not feel comfortable buying beer, since I am certain it may be a bit embarrassing  at the checkout”
“I can handle that without a problem,” the other nun replied, and she picked up a six-pack and headed for the checkout.

The cashier had a surprised look on his face when the two nuns arrived with the booze.

“We use beer for washing our hair,” the nun said. “Back at the convent, we call it ‘Catholic shampoo.’ ”

Without blinking an eye, the cashier reached under the counter, pulled out a package of Twiglet sticks, and placed them in the bag with the beer.
He then looked the nun straight in the eye, smiled, and said: “The curlers are on the house.”

Did you know that this coming Monday, September 9, is International Buy a Priest a Beer Day? On this festive day, faithful Catholics all over the world take their priests out for a beer and get to know them better. It’s a beautiful Catholic tradition that goes back to the time of St. Hopswald of Aleyard, the first man to take his priest out for a beer.

Okay, if you’re getting suspicious by now, there’s a good reason. Buy a Priest a Beer Day is not a real holiday. But I would argue that it should be!

Believe it or not, priests are real people, and they enjoy socializing over good food and drink as much as anyone. They also have a thankless and difficult job, a job that we couldn’t get to heaven without. Priests are the lifeblood of the Church, and they deserve some appreciation.

So with that in mind, I would challenge you to do something concrete to show appreciation to your priest in the month ahead. Yes, it could be taking him out for a beer, or it could be inviting him over to share dinner with your family. Be creative if you want, but give back to your priest somehow, and let him know that his ministry is making a difference.

Of course, your priest may be insanely busy and unable to schedule a time for a lengthier visit. That’s okay. You could offer a rosary or a holy hour for him and his intentions (or better yet, more than one), and let him know that you are regularly praying for him. At the very least, express to him your gratitude, in person or via a note, for his faithful ministry and his answering God’s call to the priesthood.

I fully expect there to be a lot of happy, encouraged priests by the end of the month. If you want to participate, leave a comment saying, “I’m in!” Ready, set, go. 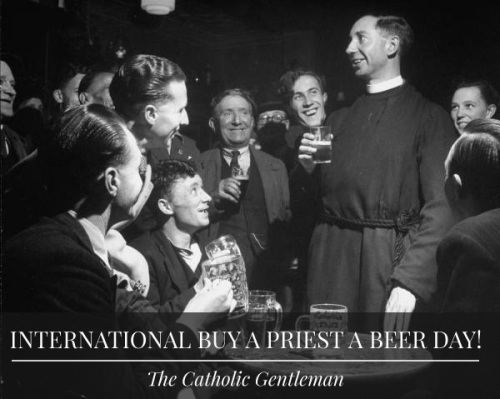 Better than Cheese and Wine. (via Anglican Memes)

An Introduction to West Indian Beer

A twelve hour plane journey to the West Indies can be pretty awful, and, in August 1979, it was the flight from hell, as we set off to my new ministry in Trinidad (travelling via Antigua and Barbados)

It was bad because of a certain 21 month child, who, being under the age of two years, didn’t qualify for a seat of his own.

Consequently, he had to sit alternatively of Helen’s and my respective laps.  And have you ever tried to change a nappy in a tiny aeroplane loo?- it’s not easy.

The drinks were complimentary, so H and I had quite a few G & Ts – though most of them ended up being spilled down us, because of the aforesaid wriggling and squirming infant.

At Antigua, I got off the plane to stretch my legs and buy some duty free.  By the time I walked to the terminal, my grey clerical shirt had tuned 50 shades darker because of the scorching heat and subsequent physical reaction to it (in other words, I was sweating like the proverbial pig)

Got a couple of bottles of rum, then was told that I couldn’t go back to the plane until the embarkation call and would have to queue up with other punters who were boarding.

So, I had my very first Caribbean beer (Banks of Barbados) served by the surliest barman that I’ve ever encountered – maybe it was the clerical collar or more likely he was miffed at working out the change in local currency from the US bill that I’d handed over.

Eventually back on the plane, and onward, via Barbados, to Piarco Airport, Trinidad.

The welcoming party must have wondered what they’s let themselves in for:  a dishevelled, sweaty minister with a grubby shirt reeking of (spilled) gin and whose breath must have smelled like a brewery.

We got to our manse eventually – and waiting there in the kitchen was a case of……. Carib Beer!  Huzzah 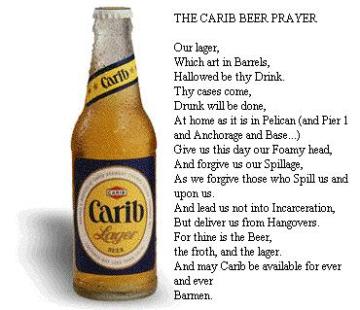 A minister was completing a temperance sermon. With great emphasis he said,

‘If I had all the beer in the world, I’d take it and pour it into the river.’

With even greater emphasis he said, ‘And if I had
All the wine in the world, I’d take it and pour it into the river.’

And then finally, shaking his fist in the air, he
Said, ‘And if I had all the whisky in the world,
I’d take it and pour it into the river.’

Sermon complete, he sat down, before announcing the next hymn………

See you at the river!

Bring your own glass!

A parishioner died while his wife was shopping. While she was busying herself in the Main Street stores, he went to a local hostelry for a pint.

Sadly, before he had a sip, he collapsed and died.

At the pastoral meeting prior to the funeral, my student asked the widow, “I hope he hadn’t paid for his drink”