for the Feast of Epiphany (via David Mcfie) 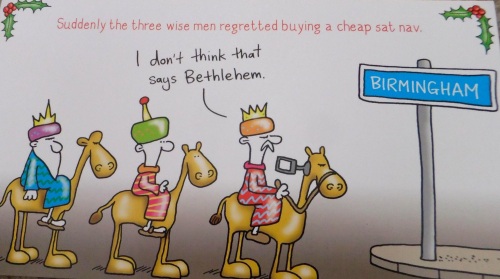 Pastor Rick Wood hands out food to the homeless in Birmingham
CREDIT: ABC 33/40
A pastor determined to live out the Bible’s dictate that we feed the poor was shut down by local police because he didn’t have a permit to serve food.
Twice a month, Rick Wood, a pastor at The Lord’s House of Prayer in Oneonta, Alabama, gets in his truck and drives around Birmingham with more than a hundred hot dogs and bottles of water, handing them out to the homeless. Wood has been serving those in need for the past six years because he wants to put Matthew 25:35-40 — “For I was hungry and you gave me something to eat, I was thirsty and you gave me something to drink,” a scripture verse he has plastered on the side of his truck — into action.
But last month, Wood was stopped from handing out food by local police because he was in violation of a new city ordinance, passed in December, that regulates food trucks. The new regulation requires food trucks to get a permit, which can cost as much as $500. Though the ordinance is specifically targeted at retail food vendors, rather than charities, the city nevertheless used it to block Wood.
He was livid. “That makes me so mad,” Wood said in an interview with ABC 33/40 News. “These people are hungry. They’re starving. They need help from people. They can’t afford to buy something from a food truck.”
The pastor accused Birmingham of wanting “to chase them out of the city.”
ABC 33/40 News’ video has more: http://youtu.be/HTgnW0WbbFk

Though the homeless population has been declining in Birmingham, significant need remains. A 2013 survey found 1,469 homeless people in the Birmingham area, a figure that has declined 36 percent in the past five years but still accounts for nearly half of all homeless people in Alabama. One-third of Birmingham’s homeless, 509 people, had no shelter at all when the 2013 count was conducted.
Birmingham is not the only city to shut down groups that hand out meals to the homeless. From St. Louis to Raleigh to Philadelphia to Orlando, city governments have implemented new restrictions on charity groups that feed the homeless. Los Angeles is considering a similar measure.
Back in Birmingham, Wood has defiantly vowed to keep serving food to the homeless. “The homeless can’t help the position they’re in,” he said. “They need help.”

The Department Store and the Quakers

Still, why should a bunch of Quakers stand in the way of commerce?

So, the department store wrote to the Quakers, offering to buy the site. Very grandly, they said, “We will give you a very good price for the land. In fact, we’ll send you a blank cheque. Please fill in whatever sum of money you think appropriate and we will honour it.”

Then they sat back and waited. Weeks passed. Finally a letter arrived from the Quakers. It thanked the department store for their generous offer but declined to accept it. “Our Meeting House has been here for almost two hundred and fifty years,” they explained, “much longer than your store. We have no wish to sell our property. However, if YOU would agree to sell YOUR site to us, we are very interested in buying it. We will give you a very good price for it. Just state your selling price and we will honour it.”

The letter was signed ‘Cadburys.’

The Parable of the Good Samaritan retold

For many of us, the Parable of the Samaritan has lost much of its original punch, having grown old and bland through familiarity and distance. So, during the coming weeks, I will be offering three different, unconventional retellings of the Parable of the Good Samaritan in hopes of reinvigorating our imaginations and reclaiming the story’s unsettling example of radical generosity.

The old preacher had been around long enough to know a fraud when he saw one. And he had grown tired of listening to this one regaling audiences in the shade of a pecan grove with fanciful tales of God that lacked any proper exegesis and rational hermeneutical lens. So, he carefully picked his question and planned his attack like a biblical chessmaster.

“Teacher, I’m confused” he called out, his pleasant drawl lazily floating on the ripples of the humid, Georgia heat. “Christians can’t seem to agree on just about anything. Sometimes it seems like they are worshiping completely different gods, to say nothing of the pagans and heathens who worship false gods. So, with all these gods running around in our heads, how do we know which god is the true God?”

The teacher sipped at his sweating glass of iced sweet tea. “Well, what does it say in the Bible? What’s your take?”

The old preacher, pleased to have the stage and perhaps set some erring minds in the audience straight, cleared his throat. “‘Well, God is good, just, loving and hates evil.’”

“Exactly, my friend,” the teacher replied. “Worship this God and you will live.”

But the man wanted to prove a point, that the teacher wasn’t worshiping this God at all. “But everybody — people of all faiths — says this is the God they serve, but clearly they can’t all be right, can they? There is only one true God, as the Scriptures says, not many.”

In reply, the teacher told another story.

“A man was going over to Atlanta from Birmingham, when he found himself in a deserted rest area on I-20. As he was getting out of his car to stretch his legs, a bunch of robbers approached him and pistol-whipped him. They left him in his underwear, bloodied, bruised and unable to move. They left him for dead, stripped of his money, credit cards and jewelry.

A few minutes later, a man arrived at the rest area and saw the poor beat up man lying in a pool of his own blood. He began to approach, but then noticed the multi-colored gay pride flag on his bumper. Instead of helping, he nodded in approval. The beaten man obviously was a heretical abomination and this beating was just, deserved punishment. So, he dragged the near-dead body into the bushes so no one else could help and continued to bring down righteous blows on him.

A little while later, another traveler stopped at the rest area and heard some rather painful moaning coming from the nearby bushes. He was shocked at the state of the beaten man, eyes swollen, blood-matted hair and the incoherent groaning in pain. He looked down in pity.

“Don’t worry,” he said to the beaten man. “You might be in excruciating pain now, but you won’t be once you get to heaven, which from the looks of your general state, won’t be too long from now. Rejoice in your suffering and count it a blessing! Soon you will be in paradise!”

On that happy note, he left, hoping the man’s suffering would purify him and joyful that another person would die on earth but live forever in heaven.

A third person arrived at the rest area. He had darker skin than the others and spoke with in heavily accented English. He too heard the moans of the beaten man.

When he saw the state of the wounded, he immediately gathered the man’s body into his arms and laid it in his back seat. After compressing the wounds, he sped to the nearby hospital where the nurse admitted the man but informed the kind traveler that without insurance they would stabilize him and send him home. The traveler pulled out a credit card and said to give the man the best care available. I’ll come back and pay anything my credit limit won’t cover.”

Which of these three do you think is the one, true God, the one who condemned and continued to torture him with hellish assaults; the one who told him to look to the world beyond; or the one who cared for him?”

The preacher replied, “The one who had unconditional mercy on him.”

“Go and serve this God, wherever you may find this God,” Jesus said