from the “Daily Mail”

Punch-up: Krystel Coleman, 29, sister of the bride, was allegedly punched unconscious by her own uncle

A wedding reception ended in disaster when a family brawl over a piece of chicken saw the bride’s sister punched unconscious – by her own uncle.

Krystel Coleman, 29, was left with a broken nose and two black eyes after Curt Hughes, 53,  allegedly punched her at her sister Karyssa’s wedding

The fight erupted when the best man pushed into the buffet queue to get food for his son, which is said to have upset uncle-of-the-bride Hughes.

The 53 year old lorry driver is said to have then hit best man, and brother-of-the-groom, Danny Smethurst, 30, and the bride’s father Kevin Coleman, 52.

Ten police vehicles had to be sent to Caldecott Hall hotel in Fritton near Great Yarmouth, Norfolk, as angry wedding guests fought in the car park outside the reception.

Even the bride’s mother Liza Coleman, 47, was knocked to the ground during the scuffle last Friday.

Bride Karyssa Smethurst, 28, of Gorleston, Norfolk, who is eight months pregnant, then had to drive her sister Krystel to hospital after an ambulance failed to turn up.

The groom, Ben Smethurst, 26, said the brawl started at the buffet table after his brother reached over to get a piece of chicken for his 11-year-old son.

He said: ‘Curt thought he was pushing in the queue, and called him “a fat c***”. My brother just told him there was no need to use that sort of language.

‘People were them dancing and enjoying themselves and everything was fine until it was time to leave.

‘Curt was heard saying that he should never have come to the wedding as it was s*** and the food was crap.

Wedding disaster: Ben and Karyssa Smethurst had their special day ruined when her uncle started a fight with Ben’s brother at the buffet and allegedly punched him and Karyssa’s father as well as gave Karyssa’s sister Krystal a broken nose and two black eyes, leaving her unconscious for 20 minutes

Day of joy: Ben and Karyssa pose for their wedding photo with maid-of-honour Krystal, left, and best man Danny Smethurst, right, before the reception turned sourMother-of-three Krystel, also of Gorleston, Norfolk, said: ‘My mum went up to Curt to push him out into the car park and told him, ‘Don’t you ruin my daughter’s wedding’.

‘Then Curt’s wife Elaine who is my mum’s sister got involved. They were both shouting at my mum.

‘I went over to Curt and said, “What are you playing at? Leave my mum alone”. Then he punched me.

‘I was out cold for about 20 minutes and was taken to the toilet where I was laid out on the floor until I came round.

‘My dad went up to Curt and they were pushing each other. Then my dad got hit and was left with a big lump on his head.

‘Another five or six people got involved. One bloke jumped on Curt’s back to try and stop him because he was going crazy.

Family celebrations: Ten police vehicles had to be called to Caldecott Hall in Fritton, where the wedding took place, to separate the fighting guests

‘My mum also ended up on the floor and was knocked out for a little while.

‘My sister tried to come rushing out but everyone was holding her back as she was just three weeks away from giving birth.

Argument: Krystal was punched by her uncle after she stepped in to defend her mother

‘Curt was about to get in a taxi, but Karyssa bravely told the driver not to take him until police arrived.’

Mr Hughes, a former bouncer of Bradwell near Great Yarmouth was arrested on suspicion of assault and later released on police bail pending further inquiries.

Beauty therapist Krystel said she came round to hear her younger son Diego, five, saying ‘Mummy’s dead’ after he saw her lying on the floor.

Krystel added: ‘It was supposed to be my sister’s special day and it was ruined at the end.

‘It had been so special up until then, honestly a perfect day. Kurt was arrested and is now out on bail.

‘The worst bit is, he hasn’t apologised. It’s just dreadful.’

A Norfolk Police spokesperson said: ‘Police were called to Caldecott Hall Hotel in Fritton, near Great Yarmouth, shortly before midnight on Friday 5 July following reports of a disturbance.

‘Officers arrived on scene to find a number of people involved in an altercation and a woman in her 20s suffered facial injuries during the incident.

‘A 53-year-old man was arrested at the scene on suspicion of assault and released on bail while the investigation continues.’

Elaine Hughes, 48, said: ‘My husband does not wish to comment.’

The Eagle (a very old and well-known story)

There is an old (and very well known) tale told about a certain man who went through the woods seeking any bird of interest he might find.  He caught a young eagle, brought it home and put it among the hens and ducks and turkeys, and gave it chicken food to eat even though it was an eagle, the king of birds.

Five years later, a naturalist came to see him and, after passing  through the garden, said ‘That bird is an Eagle, not a chicken.’

‘Yes’ said the owner, ‘but I have trained it to be a chicken.  It is no longer an eagle, it is a chicken, even though it measures fifteen feet from tip to tip of its wings.’

‘No,’ said the naturalist, ‘it is an eagle still; it has the heart of an eagle, and I will help it soar high up in to the heavens.’

They agreed to test it.  The naturalist picked up the eagle, held  it up and said with great intensity. ‘Eagle you are an eagle; you  belong to the sky and not to this earth; stretch forth your wings and fly.’

The eagle turned this way and that, and then looking down, saw the hens eating their food, and down he jumped.

The owner said; ‘I told you it was a chicken.’

‘No,’ said the naturalist, ‘it is an eagle. Give it another chance  tomorrow. ‘

So the next day he took it to the top of the house and said: ‘Eagle, you are an eagle; stretch forth your wings and fly.’  But  again the eagle, seeing the chickens feeding, jumped down and fed with them.

Again the owner said: ‘I told you it was a chicken.’

‘No,’ asserted the naturalist, ‘it is an eagle, and it has the heart of an eagle; only give it one more chance, and I will make it fly tomorrow.’

The next morning he rose early and took the eagle outside the city and away from the houses, to the foot of a high mountain.  The sun was just rising, gilding the top to the mountain with gold, and every crag was glistening in the joy of the beautiful morning.

He picked up the eagle and said to it: ‘Eagle, you are an eagle; you belong to the sky and not to the earth; stretch forth your wings and fly.’

The eagle looked around and trembled as if new life were coming to it.  But it did not fly.

The naturalist then made it look straight at the sun.  Suddenly it stretched out its wings and, with the screech of an eagle, it mounted higher and higher and never returned.

Though it had been kept and tamed as a chicken, it was an eagle.

Society has a way dehumanising us.  Of causing us to fail to see our worth before God.  Of making us little more than objects to whom advertisers make their pitch, and about whom governments create statistics and form policies to keep everything safe and predictable.

It is easy to lose track of who we are – and whose we are – and to slip into the old ways – the way of the law and it’s regulations;  the way of trying to please God by adhering to a code that measures our worth by what we do and our value by what we refrain from doing.

It is easy to forget that we are eagles and that we are meant to fly in the highest heavens. 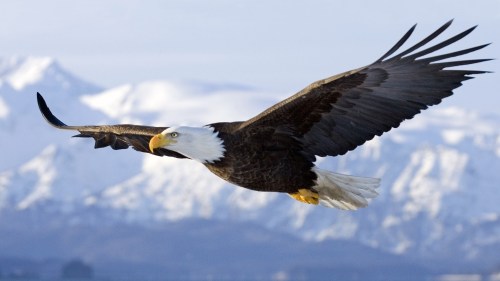