The Minister in a Bible study group once asked a woman to read from the Book of Numbers about the Israelites wandering in the desert.

“The Lord heard you when you wailed, ‘If only we had meat to eat!’ “she began.
“Now the Lord will give you meat. You will not eat it for just one day, or two days, or five, or ten or twenty days, but for a month—until you loathe it.”

When the woman finished, she paused, looked up, and said, “Hey, isn’t that the Atkins diet?”

Lost in the desert (a joke by Mohammed Zeyara) 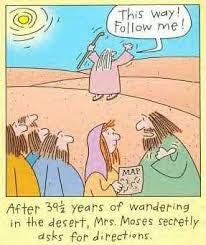 Baptism (with or without water?)

Church of Scotland candidates for the Ministry have to undergo what is known as Trials for Licence.  This happens usually after the academic side of things has been completed and before full Ordination – the time spent in between (usually a year) is as a sort of apprentice or curate – known as a Probationer or Licentiate.

There’s a service to be conducted and wise men and women from Presbytery come to listen to see if the candidate is “up to it”; there is also a longish interview to discover if he/she knows Church Law etc.

At my interview for Trials for Licence (in 1973) , I was asked, simply enough, what is the element used in Baptism……..obviously, water
Then the minister who asked the question, said “what if you’re in a desert – what would the Desert Fathers have done?”
Cheekily, I answered “pee on the candidate”
I wonder how 39 years later, I’m still an ordained Minister of Word and Sacrament!

Here’s a serious question to minister friends – at my interview for Trials for Licence, I was asked, simply enough, what is the element used in Baptism…obviously, water

Then the minister who asked the question, said “what if you’re in a desert – what would the Desert Fathers have done?”

Cheekily, I answered “pee on the candidate”

But…seriously, what?  saliva if not urine? some of the limited supply of drinking water they might have had with them?  wine?