‘Dostoevski and Thomas’ (2 Easter B )

19 When it was evening on that day, the first day of the week, and the doors of the house where the disciples had met were locked for fear of the Jews, Jesus came and stood among them and said, “Peace be with you.” 20 After he said this, he showed them his hands and his side. Then the disciples rejoiced when they saw the Lord. 21 Jesus said to them again, “Peace be with you. As the Father has sent me, so I send you.” 22 When he had said this, he breathed on them and said to them, “Receive the Holy Spirit. 23 If you forgive the sins of any, they are forgiven them; if you retain the sins of any, they are retained.”

24 But Thomas (who was called the Twin), one of the twelve, was not with them when Jesus came. 25 So the other disciples told him, “We have seen the Lord.” But he said to them, “Unless I see the mark of the nails in his hands, and put my finger in the mark of the nails and my hand in his side, I will not believe.”

The Incredulity of Saint Thomas 1602 –  Caravaggio
26 A week later his disciples were again in the house, and Thomas was with them. Although the doors were shut, Jesus came and stood among them and said, “Peace be with you.” 27 Then he said to Thomas, “Put your finger here and see my hands. Reach out your hand and put it in my side. Do not doubt but believe.” 28 Thomas answered him, “My Lord and my God!” 29 Jesus said to him, “Have you believed because you have seen me? Blessed are those who have not seen and yet have come to believe.”

On cold December morning in Russia in 1849, 20 political prisoners were lined up to be shot by a firing squad.

However, just before the order was given, a message was delivered from Czar Nicholas I cancelling the executions.

Instead, the men were to serve ten years of hard labour in Siberia.

One of the prisoners was Feodor Dostoevski, a young man whose mother had died when he was only 16 and whose father had been murdered a few years later.

When Dostoevski got to Siberia, he found a copy of the New Testament and began to read it.  By the time he had finished, he was a firm believer.

Describing his impression of Christ, he wrote to a friend:

“No one is more beautiful… and more perfect than Christ…If anyone proved to me that Christ was outside of the truth…I would prefer to remain outside with Christ than inside with the truth.”

After his release from prison, Dostoevski turned to writing novels.  In quick succession, he wrote such classics as ‘Crime and Punishment’ and ‘The Brothers Karamazov’

But success went to his head, and he began to drink and gamble heavily.  More than that, he set aside his faith.

Shortly before he died, however, Dostoevski returned to the faith.  This irritated his atheistic friends who ridiculed him.  They said that this was just the sick act of a sick man.

Commenting on their mockery, Dostoevski wrote in his diary:

“These fools could not even conceive so strong a denial of God as the one to which I gave expression….It is not like a child that I believe in Christ and confess him.  My hosanna has come forth from the crucible of doubt.”

Dostoevski’s story is not unlike the story of Thomas in today’s Gospel.

Like Thomas, he had once placed all his faith in Jesus.

And like Thomas, he returned to his faith in Jesus.

Many of us can perhaps relate to the stories of Thomas and Dostoevski.

After placing all our faith in Christ, we too so often have gone on to abandon him, as they did.

Or, if we didn’t abandon him, we did not follow him as closely as we should have.

Anyone who has travelled the road of faith, knows that it’s not a wide paved highway; rather it’s a narrow dirt track.

Jesus himself said of the road of faith: ‘How narrow the gate and constricted the road that leads to life.’

So often that road involves struggle and times of darkness.

There are times when we find it hard to believe and we are sore tested by God.  When these times of darkness come, we might recall the words of a fugitive from the Nazis who wrote on the wall of a basement in which he was hiding:

‘I believe in the sun even when it is not shining.

I believe in love even when I do not feel it.

I believe in God even when he is silent.’

Travelling that road of faith involved loving trust in God even in the darkest of times.

Remember these words which Jesus addressed to Thomas:

‘Do you believe because you see me?  How happy are those who believe without seeing me!’ 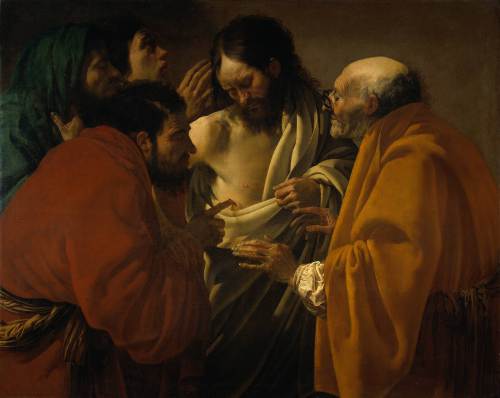 may we, who have not seen, have faith and receive the fullness of Christ’s blessing,

who is alive and reigns with you and the Holy Spirit, one God,

now and for ever.