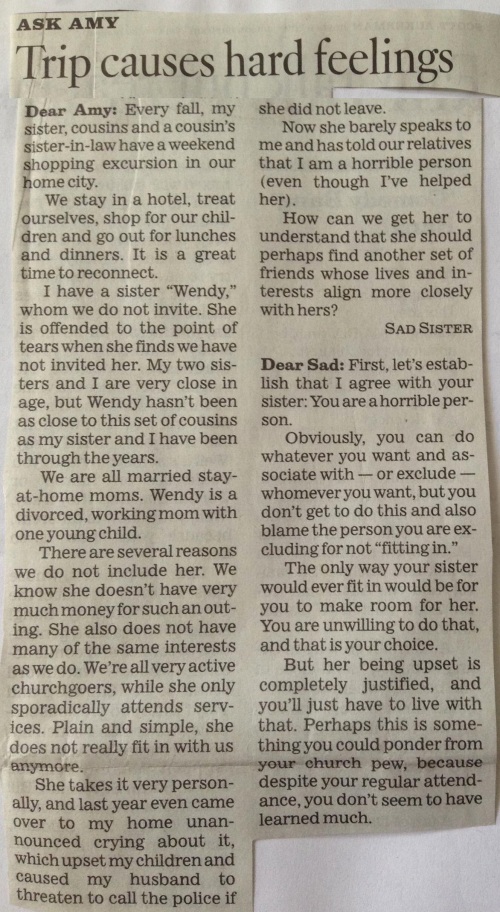 Ten Things You Can’t Do While Following Jesus

by Mark Sandlin
Lot’s of people claim to be “following Jesus” and then they do stuff like this. Sure, people who follow Jesus do these things all the time but you can’t say you are doing them because you are trying to follow Jesus’ example. (Clearly, this is not a complete list but it’s a good place to start).
10) Exclude people because they practice another religion. Jesus was constantly including people and he did it with a radical disregard for their religion. We have not one recorded incident of Jesus asking for a person’s religious affiliation before being willing to speak with them or break bread with them. We do have several records of Jesus seeking out folks who happen to practice faith differently from him. There was even this one time when he used a hated Samaritan as an example of how we are supposed to take care of each other.
9) Exclude people for what they look like, how they were born or things beyond their control. I may have mentioned this already but Jesus was constantly including people. Jesus had this rebel streak in him that actually sought out folks who didn’t “fit in.” People who were different, people who were marginalized, people who were made to feel unwanted in one way or another held a special place in the heart, life and actions of Jesus. I suspect he did it because he understood they weren’t actually different at all. Touch the leapers (the “untouchables”). Do it.
8) Withhold healthcare from people. Ever play the game “Follow the Leader”? If you don’t do what the leader does, you are out. Following means you should imitate as closely as possible. When people who were sick needed care Jesus gave it to them. If we are following Jesus, we will imitate him as closely as possible. No, we can’t repeat the miracles he did but I’ve seen modern medicine do things that are about as close to a miracle as I expect to get.
7) Exclude people. Last time. Promise. Jesus was constantly including people. It’s a little concept called love. He was pretty big on it.
6) Let people go hungry. When Jesus said “feed my sheep,” it was about more than just a spiritual feeding. As a matter of fact, if Gandhi was right (and I suspect he was), you can’t have one without the other: “There are people in the world so hungry, that God cannot appear to them except in the form of bread.” There is not a food shortage in the world. There is enough for everyone. There is not a problem with having a capable distribution system; I can eat lobster from Maine while looking at the Pacific ocean. The problem is that we aren’t very good at sharing.
5) Make money more important than God (and the children of God). The love of money really is the root of all sorts of evil. Every day we make choice about what we will do with our money. Our choices speak louder than our words. Willingly or not, our choices frequently hurt the least of these and others rather than help them. Sometimes we even hurt ourselves. Our money is so important, we willing shop at stores because they are cheeper even though we know the products they sale recklessly endanger the lives of those who make them. We buy food which is mass produced with disregard for health impacts because the farmer down the road is more expensive. We’d rather keep more of our money than pay the taxes it takes to provide for those in need. We have a money problem.
4) Judge others. “That ‘speck of sawdust in you brother’s eye’ and ‘let he who is without sin cast the first stone’ stuff? Meant it,” Jesus.
3) Be physically aggressive or violent. Okay, okay. “Jesus in in the temple grounds with the money changers.” I’ll give you that one but other than that Jesus both gave the example of and taught his followers to avoid violent behaviour. “Put your sword away, (Insert your name here).” So, what about the money changers? See #2.
2) Use the church to hurt people. For the most part, Jesus practiced Dudism. That man could abide. However, there were a few times when he seemed to get more than a bit worked up (most notably, with the money changers in the temple grounds). What could take this chill, peace-loving, Jewish-hippie from 0 to 60 in the flip of a switch? Using an institution whose primary goal is meant to be love to hurt people. (It’s important to note that while you might describe Jesus as aggressive in the temple grounds with the money changers, even then he was not physically violent toward people).
1) Hate. The one possible exception might be “hate” itself but even then hate breeds hate, so best to avoid it.