This manifesto is a real winner….not 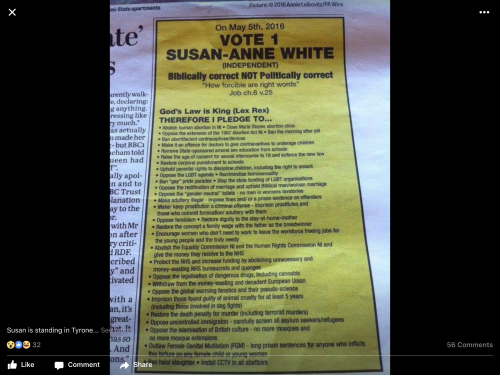 Posted: 30/04/2015 12:55 BST
An Independent candidate standing for election in Northern Ireland has enhanced her “biblically correct” reputation by claiming to have “proof” that gay people are 40 times more likely to abuse children.

Devout Christian Susan-Anne White is one of nine candidates standing in West Tyrone on 7 May.

On Tuesday she appeared at an election debate in Omagh where she made the claims as part of her defence of Democratic Unionist Jim Wells who last week made comments linking gay marriage and child abuse. 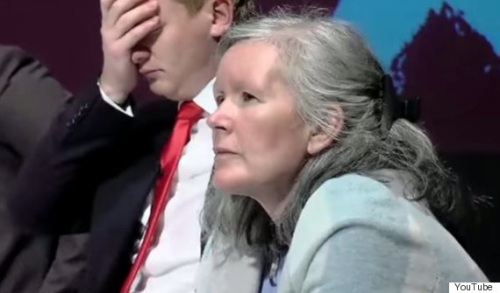 Wells has since apologised and resigned as Health Minister.

White, whose manifesto includes pledges to close abortion clinics and make adultery a punishable offence, told the audience on Tuesday: “In the main, what Jim Wells said was correct and I can prove it.

Ignoring boos and jeers, White continued, stating: “Studies have shown that homosexuals are 40 times more likely than the general populace to abuse children.”

(At this point the candidate to White’s right places his head in his hands in apparent disbelief.)

White continues, citing a handful of cases where gay people were convicted of child abuse in the United States and Britain. She is cut short by the chair who cites fears of libeling those she has named. White continues, urging the audience to Google them.

At one point, the chair of the debate asks White to cheers and applause: “Did you Google heterosexual abuse?”

White responds: “The question we are discussing at the moment is not about heterosexual abuse.

“Heterosexuals can abuse children. Because the heart of man is depraved. Of course heterosexuals can and have abused children, but the subject we are discussing here are the comments made by Jim Wells. Keep on topic!”

White had earlier took a shot at the Conservative candidate standing for the same seat.

Attacking the party’s support for gay marriage, she said: “Gay marriage is a contradiction in terms. It is not normal or natural. The Bible speaks of men acting against nature and burning in their lust one for another.”

“That is something she should hang her head in shame about. She should not be proud about that.”

In an interview earlier this month, White told the Belfast Telegraph: “I don’t consider myself extreme – not at all.

“It is society that has moved. Not so far in the past, most people would have shared my views.

“My views only seem extreme because society has moved away from God’s principles.”

Here’s a re-cap of White’s manifesto:

I pledge to:
• Close Marie Stopes Abortion clinic
• Oppose the extension of the 1967 Abortion Act to Northern Ireland
• Remove state-sponsored amoral sex education from schools
• Restore corporal punishment to schools
• Uphold parental rights to discipline children, including the right to smack
• Raise the age of consent to 18
• Make it an offense for doctors to give contraceptives to underage children
• Oppose the LGBT agenda, while showing compassion to those who struggle with gender confusion
• Oppose the redefinition of marriage
• Ban gay pride parades and recriminative homosexuality
• Stop the state funding of LGBT organisations
• Make adultery a punishable offense
• Abolish the Equality Commission NI and the Human Rights Commissions NI and give all the money they receive to the NHS.
• Oppose feminism and restore dignity to the stay at home mother
• Restore the concept of a family wage with the father as the breadwinner
• Oppose the legalisation of dangerous drugs
• Protest the NHS and increase funding by abolishing unnecessary and money wasting bureaucrats and quangos
• Withdraw from money wasting and decadent Europe
• Oppose the global warming fanatics and their pseudo-science
• Imprison those found guilty of animal cruelty including those involved in dog fights
• Install CCTV in all abattoirs
• Ban halal slaughter
• Oppose the Islamisation of British culture- no more mosques and no more extensions
• Restore capital punishment for murder, including terrorist murder

Jesus said: “Whoever is not against us is for us.”

At the height of “the Troubles” in Northern Ireland, a Catholic priest, a Protestant minister, and a Jewish rabbi were engaged in a heated theological discussion.

Suddenly an angel appeared in their midst and said to them, “God sends you His blessings. Make one wish for Peace and your wish will be fulfilled by the Almighty.”

The minister said, “Let every Catholic disappear from our lovely island. Then peace will reign supreme.”

The priest said, “Let there not be a single Protestant left on our sacred Irish soil. That will bring peace to this island.”

“And what about you, Rabbi?” said the angel. “Do you have no wish of your own?”

“No,” said the rabbi. “Just attend to the wishes of these two gentlemen and I shall be well pleased.”

It has been said: “Most people, alas, have enough religion to hate but not enough to love.”

We’re also familiar with the old adage: “Jealousy will get you nowhere.”

Jesus  challenges us to look beyond easy, comfortable stereotypes of “in-groups” and “out-groups.” Jesus teaches us the significance of tolerance, openness and co-operation.

The words of Jesus are timeless and we all stand accused. How ready we are to build fences instead of bridges, how quick to point out in connection with someone who is undoubtedly doing Christ’s work and serving the community in his spirit: ‘But he or she is not one of us’—not a member of our denomination, worse still, not even a Christian.

Exclusiveness and sectarianism have bedevilled the Church throughout its history.

Today, when Christians of different denominations learn more about each other, they are discovering all of us probably have more similarities than we do differences ~ and oftentimes our differences complement rather than contradict each other.

Moreover, our differences provide us with opportunities to become more understanding, as well as to learn and grow in our faith.

Both Morgan and Spurgeon often had larger audiences than did Meyer.

Troubled by envy, Meyer confessed that not until he began praying for his colleagues did he have peace of heart. “When I prayed for their success,” said Meyer, “the result was that God filled their churches so full that the overflow filled mine, and it has been full since.”

Who knows, maybe if enough of us prayed in the same spirit of Pastor Meyer, God may very well choose to answer our prayers in a similar way!

Even if God did not answer us in this way, nevertheless, we would benefit greatly by coming to peace with the differences of others and accepting those differences ~ rather than being jealous of them.

Jesus admonishes us to keep our minds open and to overcome our prejudices.

It means humbly acknowledging that God’s truth is far greater than any single person, congregation, denomination, or religion.

This often helps us to become more deeply appreciative and thankful for the gift of faith that God has given us.

So, the next time we catch ourselves growing jealous of or prejudiced against someone different than ourself, remember the admonition of Jesus: “Whoever is not against us is for us.”

Or as one ancient papyrus reads: “The one who is far off today will be close tomorrow.”