“When the woes of life o’ertake me,
hopes deceive and fears annoy,
never shall the cross forsake me;
lo! it glows with peace and joy”

Tips for Jesus (via Huffpost)

Restaurant servers have demanding jobs, generally working long hours with low pay and little reward. They often depend on their tips in order to survive.  That’s why it’s disheartening to see stories like that of Pastor Alois Bell, who wrote on her receipt to her waitress, “I give God 10% why do you get 18.”

But ‘Tips For Jesus’ is on a mission to show the world what Christian generosity is supposed to look like.    Spanning the country from California to Utah, ‘Tips For Jesus’ has been leaving outrageously generous tips for delighted servers.

People have been wondering about what sparked this incredible show of charity. One commenter speculated, “I feel like what might’ve started this is other things posted on the internet how people leave no tip or fake tips in ‘the lords name’. So to me this feel like a combat something showing that Jesus did say to give to the poor and waiting tables is definitely a hard job which doesn’t earn a lot.”    Though the person or people behind ‘Tips For Jesus’ remain anonymous, their ethos is strikingly similar to the words of Justin Lee, who wrote in a blog responding to Pastor Bell’s rude note, “Remember, my fellow Christians: Whatever you do, wherever you go, whenever you tip, you are representing Jesus.”

However, controversy has arisen surrounding a tip left at a bar in South Bend, Ind., called Legends of Notre Dame that didn’t go through. Apparently, American Express and Notre Dame did not clear the $10,000 tip because they were concerned about fraud, reported the South Bend Tribune in November.

However, ‘Tips For Jesus’ affirmed that the transaction was legitimate on its page, writing to a server Ashley Rust, “@arust03 AMEX got paid, you should’ve got paid. Check with Legends management… sounds like the owners are trying to screw you. Tipsforjesus pays it’s tabs!”    The server responded that the issue was with Notre Dame, as it is a university-owned bar. Tips responded, “Notre Dame is stiffing you? Hmmm, let me make sure the charges went through since they claim they did not. If they’re lying to you, I can talk to AMEX about it, then you should get a lawyer, and call the local paper and ESPN. What they’re doing flys in the face of what Jesus would do.” They later posted a photo of the Amex transaction, which was cleared.

‘Tips For Jesus’ further offered to help the server, posting, “Nobody is going to ruin the good were trying to do.”

Comments Off on Tips for Jesus (via Huffpost) 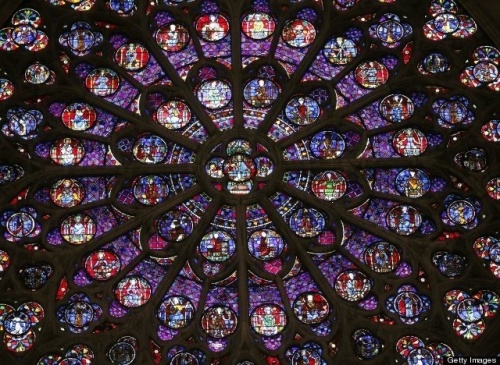 After Quasimodo’s death, Bishop Thomas of the cathedral of Notre Dame sent word through the streets of Paris that a new bell ringer was needed. The bishop decided that he would conduct the interviews personally and went up into the belfry to begin the screening process.

After observing while several applicants demonstrated their skills, he decided to call it a day.

Just then a lone, armless man approached him and announced that he was there to apply for the bell ringer’s job.

Bishop Thomas was incredulous. ‘You have no arms.’

”No matter,’ said the man, ‘observe!’ He then began striking the bells with his face, producing a beautiful melody on the carillon. The bishop listened in astonishment, convinced that he had finally found a suitable replacement for Quasimodo. Suddenly, while rushing forward to strike a bell, the armless man tripped and plunged headlong out of the belfry window to his death in the street below.

The stunned bishop immediately rushed down the stairways. When he reached the street, a crowd had gathered around the fallen figure, drawn by the beautiful music they had heard only moments before. As they silently parted to let the bishop through, one of them asked, ‘Bishop, who was this man?’

‘I don’t know his name,’ the bishop sadly replied, ‘but his face rings a bell.’