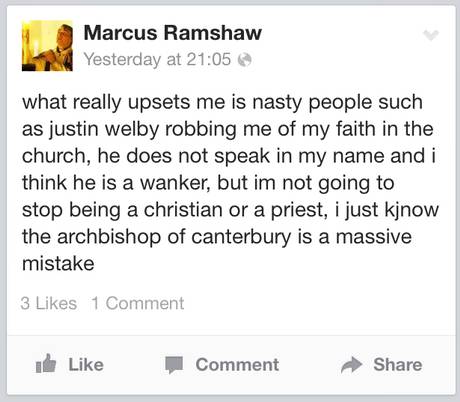 A furious row has erupted among members of the clergy after a Church of England priest branded the Archbishop of Canterbury, Justin Welby, a “w****r” for resisting the government’s attempts to legalise gay marriage.

The attack, by the Revd Marcus Ranshaw, came after Archbishop Welby warned that the Marriage (Same Sex Couples) Bill would effectively “abolish” the traditional institution of marriage, the “cornerstone” of society.

In an angry posting on Facebook last night, the Revd Ramshaw, a supporter of gay marriage, wrote: “what really upsets me is nasty people such as Justin Welby robbing me of my faith in the church, he does not speak in my name and i think he is a wanker, but im not going to stop being a christian or a priest.”

But he was swiftly taken to task by the Revd Arun Arora, the Director of Communications for the Church of England, who posted: “Calling another Christian a w****r doesn’t work for me as a priestly response,” and went on to add: “I think any right-minded person would find a priest calling his archbishop an onanist to be utterly outrageous.”

The row has since escalated, with Revd Ramshaw accusing Archbishop Welby of having “a nasty, ill-judged opinion on homosexual relations” which has divided the church into “bitterness and anger.”

Regarding his choice of language, he admitted: “i accept that that term was wrong and for that i am sorry, but i hope he knows how much hurt he is doing to faithful, loyal christians who love the Lord Jesus Christ.”

In response, the Revd Arora accused his fellow priest of being “ungracious and a liar who breaks his promises” for not readily apologising.

Speaking to The Independent the Revd Ramshaw, a former associate vicar at St Edward King and Martyr Church in Cambridge, said: “I inadvertently said the Archbishop of Canterbury was a w****r in one single line…it was not a public platform, it was a personal post which I deleted at the request of the director of communications for the Church of England. I am genuinely sorry that I got cross for one second and just put in that one word.”

The priest added: “Why should I be so taken to task about this?…I have made a complaint to Facebook and reported him for threatening behaviour. I intend to make a complaint to Church House…this is not a way to treat any Christian…it is bullying, it’s nasty and it’s horrible and I will construct a complaint on that basis.”

Lambeth Palace would not comment on the row, but in a statement to The Independent, Revd Arora said: “The issue of same Sex Marriage is an emotive one. There are a variety of views within the Church and much of that debate takes place online.

“I don’t think calling someone a ‘w****r’ is the best way of engaging. Whilst I am sure this will be water off a duck’s back for Archbishop Justin, I think it was right to challenge Marcus’ approach.”

article from the “Independent” newspaper