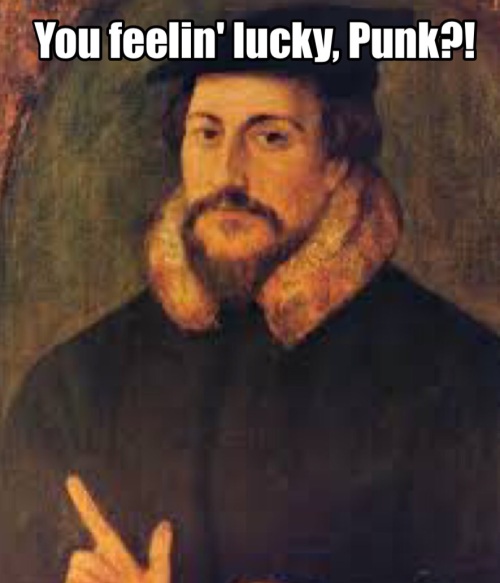 When confronted with horrific evil, our first presumption, regardless of evidence, should be to blame the Presbyterians.

Presbyterians, after all, are evil, monstrous others and we should fear them:
On Friday, July 31, three residents [two brothers and their mother] were found murdered in their home on Deerfield Drive in the coastal city of Pensacola. …
Their throats were slit, and [one victim] had a gun shot through his neck. As has been reported, the family was killed on Tues, July 28. and their deaths were caused by blunt force trauma by hammer. The police have ruled out robbery and are currently investigating.
This gruesome reality turned media frenzy after the department held an Aug. 4 news conference. During the opening speech, Sheriff David Morgan called the case “odd at best,” describing the family as reclusive. Then when he was asked about motive, he responded:
… initial research has led us to believe that there is a potential that it was a ritualistic killing … The method of the murder, blunt force traumas, slit throats, positions of bodies and then our person of interest has some ties to a faith or religion that is indicative of that.
When asked for more, Sheriff Morgan noted, “Well, again, the time of the blue moon every three years, the method of the murders and also our person of interest is known to practice this.” He was then asked directly “What religion?” Sheriff Morgan responded, “It is Presbyterianism.” The full news conference was uploaded to You Tube.
That was all it took. Within minutes, the local, national and, eventually, international media were reporting on the triple murder. “Presbyterian suspected in savage murder of family” reported the local CBS affiliate WKRG. The Washington Post announced, “Florida triple murder tied to ‘Presbyterianism’ and blue moon, police say.” And NOLA.com asked,”‘Presbyterianism’ and ‘blue moon’ behind Pensacola triple homicide?”
Shortly after, NBC quoted ECSO’s own Sgt. Andrew Hobbes saying, “It appears that this might be connected to some type of Calvinist ritual killing and possibly tied to the blue moon.”

Presbyterianism suddenly changed to Calvinism. Several ABC and CBS affiliates around the country picked up the wording change. For example, one in Texas reported, “Reformed ritual may be motive behind deaths of three family members in Fla.” And, the UK’s Daily Mail announced, “Florida family murdered with a hammer in ‘ritualistic Calvinist killing planned to coincide with the Blue Moon‘ ”
The weird leap by law enforcement and media to attribute this brutal crime to Presbyterianism is wholly unfounded. For one thing, the killings took place several days before the full moon or “blue moon” on July 31.

And in any case the sheriff just pulled that full moon stuff out of his backside — there’s no ritual or ceremonial importance to a blue moon in Presbyterianism. Nor is there any Presbyterian or Calvinist ritual that involves lethal violence, let alone — as the sheriff bizarrely suggested — a specific type of lethal violence involving a hammer and the particular positioning of the bodies of these victims.

Sometime last year, the US quietly passed a milestone demographers had long been predicting: for the first time in its history, this country is no longer majority Protestant. Fewer than 50 percent of Americans now identify as Protestant Christians of any denomination.

This change has come on surprisingly recently, and from a historical perspective, with breathtaking speed. As recently as 1993, almost two-thirds of Americans identified as Protestants, a number that had remained stable for the several preceding decades. But sometime in the 1990s, the ground started to shift, and it’s been sliding ever since.

Whether it’s the “mainline” Protestant denominations like Methodists, Episcopalians, Lutherans or Presbyterians, or the independent evangelical, charismatic and fundamentalist sects, the decline is happening across the board. The rise of so-called megachurches, like Rick Warren’s Saddleback Church in California or Mark Driscoll’s Mars Hill in Seattle, represents not growth, but consolidation.
What’s happening to these vanishing Protestants? For the most part, they’re not converting to any other religion, but rather are walking away from religion entirely. They’re becoming “nones,” as the Pew Forum on Religion and Public Life puts it. It seems likely that this is the same secularizing trend being observed in Europe, as people of advanced, peaceful democracies find religion increasingly irrelevant to their daily lives.
The spokespeople of the religious right have noticed this trend as well, but it’s clear they have very little idea what to do about it. In a column from 2005, Albert Mohler, the president of the Southern Baptist Theological Seminary, declared that “theological liberalism” is at fault for Christianity’s decline, and that the only thing they need to do to reverse it is to make “a bold commitment to biblical authority.”

Far from it, the evidence is clear that churches clinging to antiquated dogma are part of the problem, as young people turn away from their strident decrees about gays and women.

How many Christians does it take to change a lightbulb?

Charismatics: Only one. Hands already in the air.

Pentecostals: Ten. One to change the bulb, and nine to pray against the spirit of darkness.

Presbyterians: None. Lights will go on and off at predestined times.

Roman Catholic: None. Candles only.

Baptists: At least 15. One to change the light bulb, and three committees to approve the change and decide who brings the potato salad.

Episcopalians: Three. One to call the electrician, one to mix the drinks and one to talk about how much better the old one was.

Methodists: Undetermined. Whether your light is bright, dull, or completely out, you are loved. You can be a light bulb, turnip bulb, or tulip bulb. Church wide lighting service is planned for Sunday. Bring bulb of your choice and a covered dish.

Jehovah’s Witnesses: Three. One to screw in the bulb, and two to knock on your door and ask you if you’ve seen the light!

Mormons: Just one, after his wives have gotten on the school bus.