Prince Charles: Christianity under threat (from the Telegraph)

Christianity is beginning “to disappear” in its own birthplace after 2,000 years because of a wave of “organised persecution” across the Middle East, the Prince of Wales has warned.

In an impassioned intervention, he said that the world is in danger of losing something “irreplaceably precious” with communities tracing their history back to the time of Jesus now under threat from fundamentalist Islamist militants.

Speaking openly of his own Christian faith, he said he had become “deeply troubled” by the plight of those he described as his “brothers and sisters in Christ”.

And the Prince, a long-standing advocate of dialogue between religions, voiced personal dismay at seeing his work over the last 20 years to “build bridges and dispel ignorance” being deliberately destroyed by those attempting to exploit the Arab Spring for their own ends.

He devoted a Christmas reception for religious leaders at Clarence House to draw attention to the threat Christians have come under in recent months across Egypt, Syria, Iraq and other parts of the region.

In a calculated display of unity, he delivered his comments flanked by Prince Ghazi of Jordan and joined by the Archbishop of Canterbury, the Most Rev Justin Welby, the Roman Catholic Archbishop of Westminster, the Most Rev Vincent Nichols and the Chief Rabbi, Ephraim Mirvis.

It came at the end of a day in which he heard vivid personal testimony from Middle Eastern Christians who have fled to the UK as he visited the London cathedral of the Syriac Orthodox Church and the Coptic Orthodox Church centre in Stevenage, Herts.

Clerics spoke of a new era of “martyrs” as one Syrian man clasped his hands together pleading with the Prince for help. Another showed him mobile phone pictures of the destruction in his own village.

In his address the Prince urged Christians, Muslims and Jews to unite in “outrage” as he warned that the elimination of Christianity in much of the region in which it developed would be a “major blow to peace”.

“I have for some time now been deeply troubled by the growing difficulties faced by Christian communities in various parts of the Middle East,” he said.

“It seems to me that we cannot ignore the fact that Christians in the Middle East are increasingly being deliberately targeted by fundamentalist Islamist militants.”

In a reference to the Christmas story, he added: “Christianity was literally born in the Middle East and we must not forget our Middle Eastern brothers and sisters in Christ.

“Their church communities link us straight back to the early church as I was reminded by hearing Aramaic, our Lord’s own language spoken and sung just a few hours ago.

“Yet today the Middle East and North Africa has the lowest concentration of Christians in the world – just four per cent of the population and it is clear that the Christian population has dropped dramatically over the last century and is falling still further.

“This has an effect on all of us, although of course primarily on those Christians who can no longer continue to live in the Middle East.

“We all lose something immensely and irreplaceably precious when such a rich tradition dating back 2,000 years begins to disappear.”

Speaking personally, he added: “For 20 years I have tried to build bridges between Islam and Christianity and to dispel ignorance and misunderstanding.

“The point though surely is that we have now reached a crisis where the bridges are rapidly being deliberately destroyed by those with a vested interest in doing so.

“This is achieved through intimidation, false accusation and organised persecution including upon Christian communities in the Middle East at the present time.”

Prince Ghazi emphasised the importance of Christianity to the Arab world.

“Christians were present in the Arab world 600 years before Muslims,” he said.

“Indeed, Arabs were perhaps the first non-Hebrew Christians in the world, and became Christians during Jesus Christ’s own lifetime.”

Comments Off on Prince Charles: Christianity under threat (from the Telegraph)

After the Baptism of Prince George 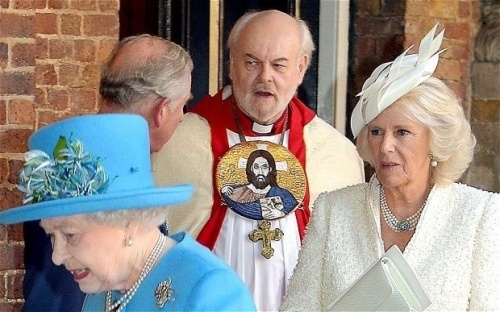 Prince of Wales to Dr Chartres: “I say, old bean, there was no need to bring your own plate with you; we’ve got more than enough for the Christening tea-party”

Do you remember – it was 1981 – when Prince Charles got engaged to the then Lady Diana Spencer.  In a pre-wedding interview, when asked if they were in love, Diana answered  “of course”, while Charles made his famous and telling reply, “Whatever love is”.

Well, obviously and sadly it appears that he didn’t really get to understand fully during his marriage to the Princess of Wales.

Love – whatever that is.

I’d be a beggar or a knave for you;

And if that isn’t love, it will have to do

Until the real thing comes along.

I would cry for you, even sigh for you,

Tear the stars down from the sky for you

If that isn’t love, it’ll have to do

Until the real thing comes along.

I would rob, steal, beg borrow and lie for you

Lay my little body down and die for you,

If that ain’t love, it’ll have to do

Until the real thing comes along

Although the love described there is what the New Testament would describe as “eros” which is passionate, sensual love (there’s also philia which is essentially loyalty to friends, family, and community), there’s an element of sacrifice in it which we also find in the kind of love Jesus is talking about in our gospel passage today.

It is the kind of love that is described as Agape in the New Testament, and  it’s the most powerful force in the universe

A Gaelic legend tells of an eagle swooping down and carrying a little baby to it lofty nest. The strong men of the village tried to scale the high and rugged cliff, but each one failed.

Then past them went a small, frail woman, climbing the sheer precipice and returning the baby to safety. “How did she do it” the strong men asked in amazement. She told them her secret, “I am the baby’s mother ” Her love enabled her, frail as she was, to outdistance the strongest of men.

Jesus command us to love, because God has loved us so much that we are motivated to reflect his love to others.

Jesus commands us to love as members of his family so that we can give glory and honour to God because of his great love to us. It says in the Bible, “God so loved the word that he gave is only begotten son, that who so ever believes in him shall not perish, but have eternal life.”

God acted, he gave, God loved us, and Jesus is saying because of that love, because of God’s love for us, we are to love one another, to reflect God’s love in our lives, to give honour and glory to God.
Christ’s love is genuine, honest, caring and compassionate – his is a sacrificial love. His love is there, it is not turned off and on by fleeting passions, or emotional highs. Jesus’ love has a responsibility to it.

We are responsible, we are accountable for our action of love. There is freedom in the word love, but also a responsibility, a commitment, a sense of pride, a sense of value, a sense of dedication to some one, some principle, some value or truth that we hold high.