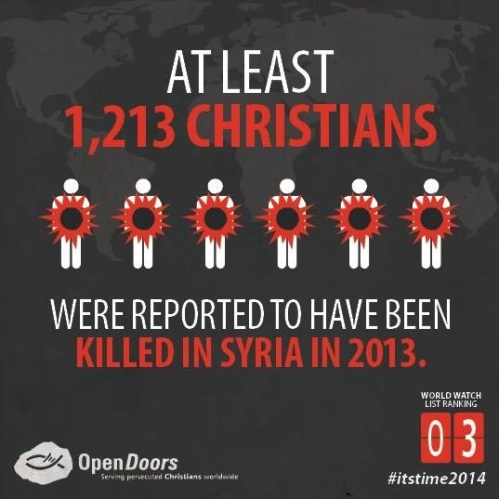 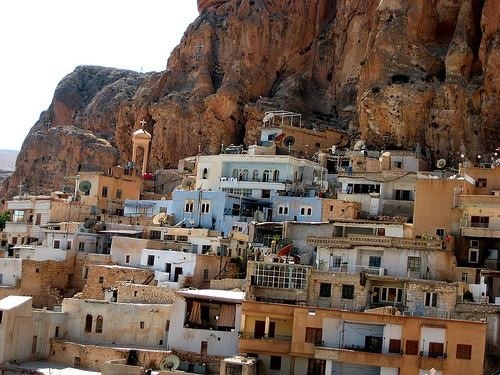 God of Mercy, we continue to lift the Syrian people up to you. The capture of the Christian village of Maaloula is of particular concern as we fear the loss of an ancient community of believers. Lord, give strength, courage, and peace to your people and allow the people of Maaloula to be a witness of your great power and love. We also pray for wisdom for world leaders and courage for citizens around the world to stand against violence and military action. Lord in your mercy…
( sabeel – weekly wave of prayer)
http://en.wikipedia.org/wiki/Christianity_in_Syria

A 15-year-old atheist boy was reportedly shot in the face in a brutal execution by Syrian rebels, in a crime revealed by an anti-government monitoring group concerned about the actions of some Islamist fighters.

Coffee seller Mohammad Qataa was allegedly shot in the face and neck a day after being kidnapped by an Islamist group in Aleppo, called the Islamic State of Iraq and Syria, once previously known as the Nusra Front.

Photos have been released of the boy’s bloodied mouth, his jaw blown off, with bullet wounds to his neck.

The Syrian Observatory for Human Rights, a Britain-based group opposed to the Assad regime, said it had decided to reveal the horrific crime because it undermines the opposition’s cause, the group said in a statement.

The Syrian Observatory for Human Rights said the boy had been arguing with someone about the existence of God, and was heard to say: “Even if the Prophet Mohammad returns, I will not become a believer.”

But other sources suggested that the comment was misheard, and that the boy was actually arguing with another customer over giving him a free coffee, saying “Even if the Prophet returns, I will not give you a free coffee.”

Qataa was reportedly abducted and tortured for 24 hours, before being dragged into the middle of a crowded street and executed in front of his mother. Eyewitness told the Observatory they did not believe the men were Syrian.

The Observatory said in a statement: “People gathered around him and a member of the fighting brigade said: ‘Generous citizens of Aleppo, disbelieving in God is polytheism and cursing the prophet is a polytheism. Whoever curses even once will be punished like this’.

“He then fired two bullets from an automatic rifle in view of the crowd and in front of the boy’s mother and father, and got into a car and left.”

“The observatory cannot ignore these crimes, which only serve the enemies of the revolution and the enemies of humanity,” the Observatory’s founder Rami Abdulrahman said.

The 2004 film Hotel Rwanda chronicles the genocide that took place in Rwanda, Africa, in 1994. Three months of bloodshed in Rwanda resulted in over one million deaths in the very small country, , but the rest of the world hardly took notice.

But why didn’t people want to intervene in Rwanda? How could the world sit silently by as one million were killed? That’s a hard question to answer.

But world leaders definitely did not see Rwanda as their problem. They didn’t want to get involved. And they sought ways to free them from their legal obligation to intervene, even if they could not avoid their moral and ethical obligation to act.

The road to Jericho wasn’t unlike places today – places where you’re wise enough not to go alone, at night, or probably even with other people if you can avoid it.

And we know places across the world that are Jericho Roads – in fact, today, most of us would not dare to travel to some African countries, Or Iraq. Or Afghanistan. Or North Korea. The Jericho Road is Syria, Zimbabwi. It is Rwanda in 1994. We know what the Jericho Road is, without ever having been there.

The Jericho Road is always with us.

Who is my neighbour? Who are we called to risk for? Jesus asked, “which of these three, do you think, was a neighbour to the man who fell into the hands of the robbers?” The lawyer said, “The one who showed him mercy.” Jesus said, “Go and do likewise.”

Let us find Jesus crucified not on the cross of yesterdays old wood but in Syria, Afghanistan, Pakistan, Somalia, Palestine, Ethiopia, Mali, etc.

Let us find Jesus not in a Garden long lost, but sweating blood in the furnace of clerical child abuse and church homophobia.

Let us find Jesus not broken in bread and wine but torn apart as he sifts with the poor for food through the garbage on India’s rubbish heaps.

Let us find Jesus tortured not in some kangaroo court of old but in Guantanamo Bay and America’s Death Rows.

Let us find Jesus raised not in an Easter Garden but in what we do to help challenge and change corruption and to heal the casualties of this long struggle against evil.