“The catholicvote.org education fund is something. I’m going to choose not to find out too much about them because the insane anti-gay marriage video they released says more than I need to know. It’s a video where people of all races and genders—and one creed—sit down in front of the camera and talk cryptically about feeling like they can’t talk about how much they hate gay people being allowed to marry. High-fill lighting and (probably) a ring light is placed in their eye-line to make those oppressed Catholic eyes pop and a sad meditative score will bring you to tears. These poor Catholics continue to be oppressed! It is insane and offensive and, unfortunately for them, really unforgivable.” 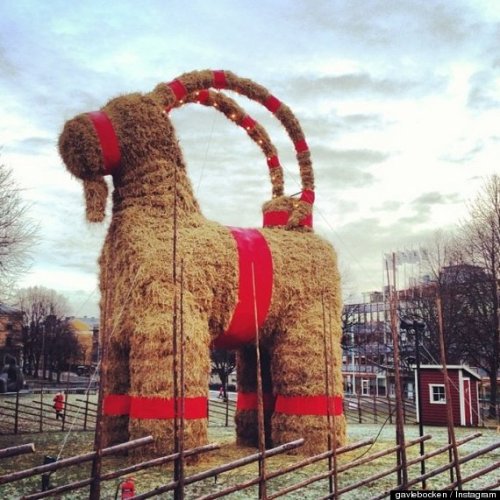 Since the enormous straw caprine, or ” Gävlebocken,” was erected in the town’s main square in 1966, it’s been subject to the attacks of vandals who try to burn it to the ground and often succeed. In fact, it’s been torched by arsonists on more occasions than it has actually survived the season.

The goat itself is a social creature that updates the world on its life via Twitter, Instagram, and Blogspot in both English and Swedish.

Last year, the goat only lasted until December 12th, before it went up in flames.

But this year, town officials are confident that the goat won’t burn, due to the anti-flammable liquid that they’ve soaked the hay with, reports The Local.

It was officially opened to the public on Sunday, Nov. 30, amidst much fanfare in the Castle Square. The Gavle goat is an enormous version of a Yule goat, one of Scandinavia and Northern Europe’s oldest traditions.

In past years, the goat has been subject to a foiled helicopter kidnapping attempt, and an arson gang that tattooed themselves with images of the burned Gavlebocken.

Gavlebocken says it’s optimistic about this year, however.

Gävlebocken @Gavlebocken
Gävlebocken
@goatwatcher Yes! I am planning to celebrate Christmas and New Year with all my friends! Feeling safe this year!

We wish it all the best.

Comments Off on Gavle Goat

Costco and the Bible

Elizabeth went to her mother Lorraine with a vexing question. She had just completed her weekly reading assignment, and wasn’t sure about which category her book fell under: fiction, or non-fiction. Lorraine also had a tough time answering the question, because the book they were wondering about was the Bible.

They’re not the only ones who have wondered whether the Bible falls into the category of fiction or nonfiction.

Costco recently roused the ire of Pastor Caleb Kaltenbach when he discovered a stack of Bibles with a ‘Fiction’ sticker at their Simi Valley, Calif. location. He told Todd Starnes of Fox News, “All the Bibles were labeled as fiction. It seemed bizarre to me.”

Kaltenbach is the lead pastor at Discovery Church, a non-denominational Christian congregation located in southern California. He told Starnes, “People are pretty shocked and upset. We are supposed to be living in an era of tolerance, but what Costco did doesn’t seem too tolerant.”

A Costco representative told Starnes that there was a “human error at a warehouse,” and that it was “all fixed.” However, as of Nov. 18, Starnes reported that there was still “a boatload of Bibles in the Simi Valley store still marked as fiction.”

The labeling issue needn’t be so black and white, feels Kaltenbach. “If they don’t believe in the Bible, that’s fine – but at least label it as ‘religion’ as some bookstores do, or ‘inspiration’,” he said to Fox News.

Starnes raised the issue to pastor and author Robert Jeffress, who said, “Let’s hope Costco’s explanation is true and not the result of having been caught attempting to marginalize the very foundation of Christian beliefs, the Bible. Christians need to call out organizations like Costco whose actions undermine Christianity – regardless of whether those actions are accidental or intentional.”

If most people saw an enormous tornado passing terrifyingly close to their house, they would probably run for cover.

However, Anthony Khoury watched steadfastly from his window as he calmly recited “The Lord’s Prayer,” “Hail Mary,” and “Glory Be,” while videotaping the massive storm that hit his neighborhood in Washington, Ill. The resulting video, submitted to CNN iReport, is a powerful demonstration of faith in the face of danger.

“I come from a very devout Catholic Christian family, and we trust in God that he protects us, and he always gives us strength and courage to help us endure all sorts of sufferings and threats,” 21-year-old Khoury told CNN.

He talked about the sudden storm to the Weather Center, saying, “It was so unexpected to see that coming. I heard the sirens come on, and I thought it was just going to be a small storm, then all I see is a massive black tornado. My mother, my father, and I, we all panicked, we all ran downstairs and started praying.”

Amazingly, the storm that devastated his neighborhood a mere two streets away didn’t damage Khoury’s house. “It was my street, and the street next to us were the only ones in the neighborhood that weren’t hit by the tornado,” he told CNN.

“We believed that God would keep us safe,” Khoury said.

A nice Christian boy? (from the Telegraph)

Cristina Odone is a journalist, novelist and broadcaster specialising in the relationship between society, families and faith. She is a Research Fellow at the Centre for Policy Studies and is a former editor of the Catholic Herald and deputy editor of the New Statesman.

Justin Bieber prostitute claims: his management should be ashamed of themselves
November 7th, 2013
A video that looks A LOT like Justin Bieber lying on an unmade bed has surfaced.

The woman – apparently a Brazilian prostitute – claims the rock star is dozing off in post-coital bliss. Who knows? Even if it’s not true, there have certainly been a few unsavoury incidents involving the teenage idol.
Stories like this will finish off what remains of Justin’s clean Christian image. He was the one pop star whom tweenies can adore without alarming their parents. But Biebermania only really worked when, while all his acolytes were losing their head, the young idol  kept his. And that was a totally unrealistic expectation.
Stand by for some sniggering about the power of prayer failing the little Christian boy. Cynics will taunt Bieber with accusations of being the kind of hypocrite we usually associate with sweaty-faced US televangelists.

But if the image of a pure and pious sweetheart was counterfeit, whose fault was that? Not Justin’s: he only sang and danced and tried to grow up under the glare of global publicity. The blame should be placed squarely on his “supporters”, who managed the publicity, the performances, the lifestyle. The men and women who manufactured Justin Bieber Superstar should have known better than to place such huge demands on him. I’m convinced Justin was a devout Christian – but selling his faith as part of his brand was bound to backfire

.
Like Mylie Cyrus twerking, accusations that Bieber paid for sex – even though they’r completely unproven – make me fear for any young person catapulted by talent, and greedy schemers, to the centre of the stage. Does no one remember what happened to Michael Jackson? You’d don’t have to be as weird as Jacko to sustain long-term damage when you’re confronted by immense fame even before your brain has stopped developing (at roughly the age of 21).
Bieber didn’t have a chance to be a real person, let alone a good Christian. From the moment he thrilled an audience with his voice and his pretty-boy looks, he became a cash cow to be milked. Those who exploited his innocence should be ashamed of themselves. The rest of us should just forgive him.
© Copyright of Telegraph Media Group Limited 2013

There are no atheists in foxholes, the saying goes. Republicans in Congress don’t want them in the military chaplain corps, either.

That’s after New Jersey Democratic Rep. Rob Andrews offered an amendment to the 2014 National Defense Authorization Act Wednesday that would allow humanists or members of ethical culture groups to join the chaplain corps. Andrews’ idea was to help members of the military who don’t believe in God, but want someone to talk to about problems without having to seek a medical professional.

But Republicans on the House Armed Services Committee objected mightily, saying that atheists can’t offer spiritual counseling and would likely offend dying soldiers or their families.

“They don’t believe anything,” said Rep. Mike Conaway (R-Texas) “I can’t imagine an atheist accompanying a notification team as they go into some family’s home to let them have the worst news of their life and this guy says, ‘You know, that’s it — your son’s just worms, I mean, worm food.'”

“This I think would make a mockery of the chaplaincy,” said Rep. John Fleming (R-La.). “The last thing in the world we would want to see was a young soldier who may be dying and they’re at a field hospital and the chaplain is standing over that person saying to them, ‘If you die here, there is no hope for you in the future.'”

Rep. Adam Smith (Wash.), the top Democrat on the committee, responded that atheists and humanists do in fact have strong belief systems that they value just as much as Christians value theirs. And he pointed out that there are many atheists in the military, famously the late NFL star Pat Tillman, who died in friendly fire in Afghanistan.

“To say that an atheist or a humanist doesn’t believe anything is just ignorant,” said Smith. “The response to the gentleman’s amendment makes me feel all the more the necessity of it.”