The Temple of the Tooth 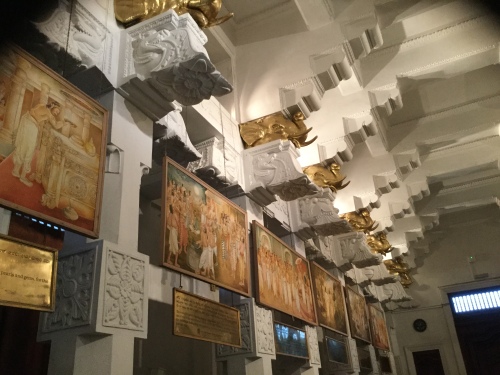 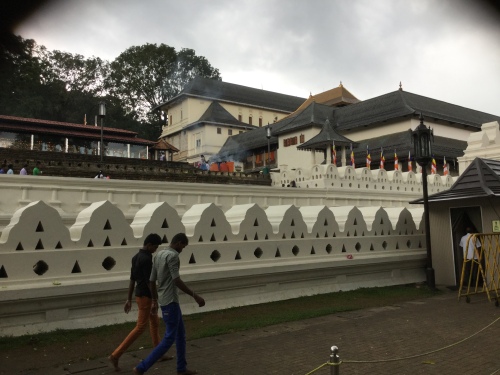 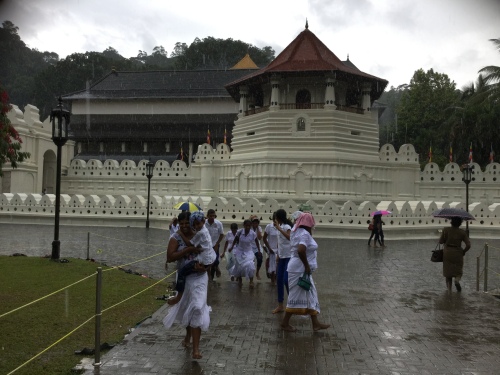 According to legend, the tooth was taken from the Buddha as he lay on his funeral pyre. It was smuggled to Sri Lanka in 313 AD, hidden in the hair of Princess Hemamali who fled the Hindu armies besieging her father’s kingdom in India.

It immediately became an object of great reverence and was enshrined in a series of nested jeweled reliquaries. The tooth was brought out for special occasions and paraded on the backs of elephants, which are sacred to the Buddha. where it survived numerous attempts to capture and destroy it.

When the capital was moved to Kandy, the tooth was taken to the new city and placed in temples built to honor it. The temple was originally built under Kandyan kings between 1687 and 1707, but later severely damaged during the 18th-century colonial wars against the Portugese and Dutch. After the wars, the original wooden structures were restored in stone.

On the outside, the temple buildings are not magnificent or elaborately decorated. White with red roofs, they cluster around Kandy Lake (the island in the middle once housed the king’s harem).

In striking contrast to the plain exterior, the interiors of the temple buildings are richly carved and decorated with inlaid woods, ivory, and lacquer.

Around the entire complex is a low white stone wall, delicately and simply carved with openings that give a filigree effect. During celebrations, candles are placed in the openings, lighting up the entire front.

The relic of the tooth is kept in a two-story inner shrine fronted by two large elephant tusks. The relic rests on a solid gold lotus flower, encased in jeweled caskets that sit on a throne.

Tagged as Buddha, Kandy, Sri Lanka, Temple of the Tooth

‎”Come to me, all you that are weary and are carrying heavy burdens, and I will give you rest.” [Matthew 11:28]