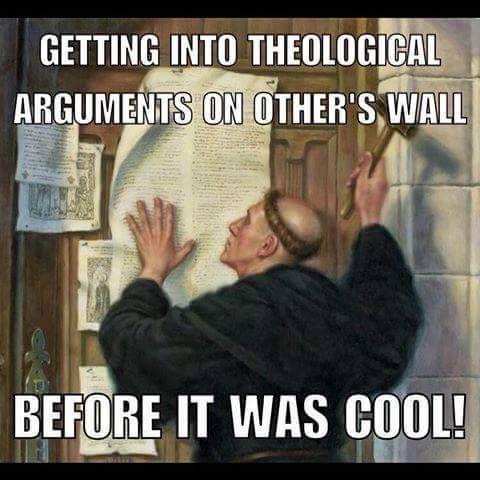 Here is what I stand in 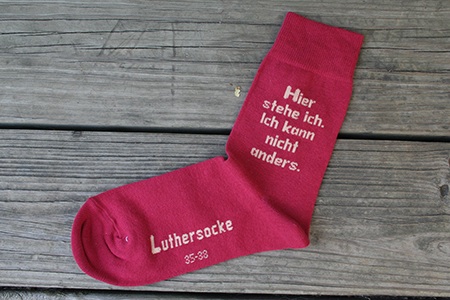 Martin Luther was very probably wearing socks just like these when he delivered his defiant “Here I stand, I can do no other” speech before Emperor Charles V. His Mum would have made sure of it: “You’re not going to see the Emperor without your best socks on.”

Which is why it’s so appropriate that the town of Wittenberg, where Luther lived, is now selling the Luther Sock, complete with his “Here I stand” speech, which he probably never made, spoilsport scholars say.

The Luthersocke: yours for just 7 Euros.

Thanks be unto Lori Erickson of the Spiritual Travels blog for the sock alert and photo.

via “Ship of Fools” 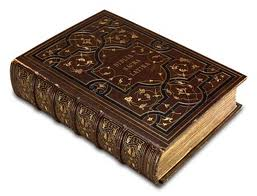 A collector of rare books ran into an acquaintance who told him he had just thrown away an old Bible that he found in a dusty, old box.

He happened to mention that Guten-somebody-or-other had printed it.

“Not Gutenberg?” Gasped the collector.

“You idiot! You’ve thrown away one of the first books ever printed. A copy recently sold at an auction for half a million dollars!”

“Oh, I don’t think this book would have been worth anything close to that much,” replied the man. “It was scribbled all over in the margins by some guy named Martin Luther.”

Sir Charles Gordon, General Gordon the gallant British soldier who during the 1880s, accepted the assignment of liberating English citizens and Egyptians from the Sudan city of Khartoum, which had been invaded by the Mahdi and his Arab forces.

He is reputed to have said about the soldiers he needed “Send me no more of your lukewarms.”

Another “general” who tolerated no lukewarm soldiery was General William Booth, founder of the Salvation Army.

Late in life, it was announced that General Booth was going blind and that his days of usefulness were over. After many weeks of seclusion this Christian warrior of four score years appeared in public once more putting in long days of tireless work, minus one eye and with only dim vision in the other.

He addressed a London audience of over 4,000, pouring out his heart to them in these words, “I want to do more for humanity. I want to do a great deal more for Jesus. There are thousands of poor, wretched, suffering and sinning people crying out to us for help, and I want to do for them.” Booth was not one of Christ’s lukewarms.

Nor should we be.   Christ does not want any lukewarm followers, but those who are willing to risk, to take a chance to spread his saving grace out in the world.

He wants us to reach out to those who are staggering with the burden of life and give them his grace. And that just might mean that we are to help them carry their burden, to walk besides them in their journey of life.

He doesn’t want – he does not need – those who feel it’s good to play it safe; otherwise his work will never be done, and the harvest will never be taken in.